After one year of monitoring flight patterns of false armyworm moths and testing a climate-based temperature model, new information about this insect is revealing some interesting facts.

The false armyworm (Photo 1) has for many years been known in South Africa as a low impact pest on maize and sorghum. However, a severe outbreak on barley in 2010 alerted producers to the potentially devastating feeding behaviour of this pest. Moreover, producers and researchers realised that sporadic outbreaks at pest level were indeed possible, with economic yield loss on small grains. 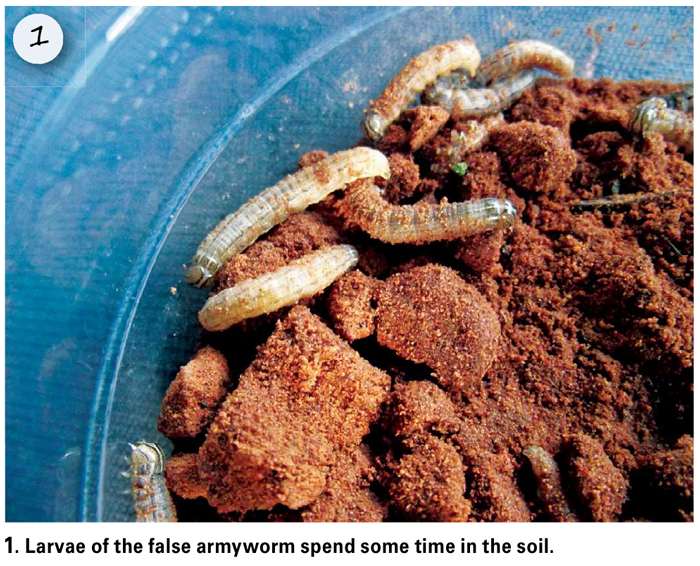 Subsequently, false armyworm moth flights are being monitored in all major barley producing areas of South Africa as part of a project funded by AB InBev. Monitoring includes the north western irrigation areas, central irrigation areas (including Vaalharts, Taung, Modderrivier, Luckhoff and Douglas) and the dryland production areas of the Western Cape.

Pheromone traps (volatile cues emitted by female moths to attract males) were provided to collaborating producers who count the number of moths on a weekly basis and then send the numbers to ARC-Small Grain. Here, data are processed and graphs constructed to determine when moth flight peaks occur.

These thresholds were determined in Japan during the mid-seventies and after initial testing seem to fit closely for this pest in South Africa as well. Mean temperature data for the ten-year period between 2008 and 2018 are used for model calculations. Data from the Skuinsdrift site will be used to describe our findings.

Interestingly, it was found that the ten year mean temperature came very close to the 10,3°C developmental threshold, but never dropped below it (Graph 1). This was also found for most of the Western Cape, while the mean temperature in the central irrigation areas drops below this threshold value only for short periods.

The larvae are normally present on or underneath the soil surface, which is covered with layers of dead plant material. This environment could serve as a good isolation against low temperatures. However, during the mid-winter time very few heat units are accumulated per day causing the lifecycle to become stretched over several weeks.

Overlapping generations
From the mean number of moths recorded per day, it is clear that moths are flying throughout the year, while several small flight peaks occur until week 18 (beginning of May) (Graph 2). A steady build-up then follows to week 23 (beginning of June).

According to the model calculations, two cycles occurred between week six and week 21. The other peaks that occurred during this period should be moths migrating in from other areas.

Lifecycles calculated from week 14 (beginning of April) stretch over long periods, because of the lower number of heat units per day. The increase in moth numbers during this period causes several overlapping generations to occur, albeit at low activity throughout the winter. According to the model calculations, these moths will hatch from mid-August.

However, the interesting part is the strong probability that during October (week 40 to week 43) the moths of seven lifecycles are due for emergence, which may cause a huge population outbreak. During the previous season, strong moth peaks also occurred from the end of September onwards (Graph 3), which could be a confirmation that the calculations of the model are accurate.

The implication of these large moth numbers present in October could be numerous larvae present during October and November, which is the time when barley is almost ready for harvest and prone to damage as occurred in 2010. The population development will be critically followed by ARC-Small Grain to determine if the calculations of the lifecycle are correct. Producers will be alerted accordingly.

For more information contact Dr Goddy Prinsloo at 058 307 3435 or prinsloogj@arc.agric.za.

This research was made possible through the financial support of AB InBev and the ARC.

Farming is not a job, it’s a lifestyle