Home FOKUS The new wheat kids on the block 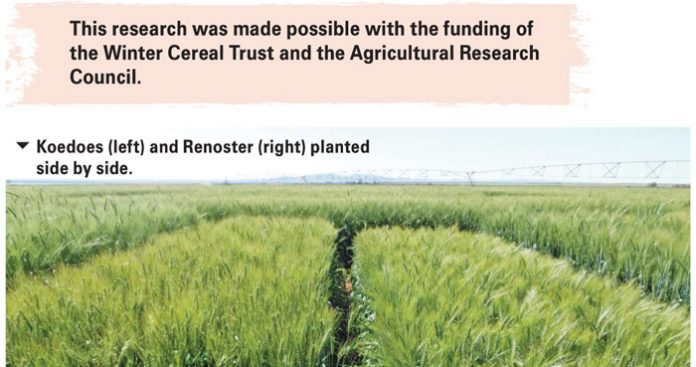 Two new wheat cultivars will soon be available as part of the ARC-Small Grain irrigation wheat package. Certified seed multiplications for the two cultivars are currently under way and demonstration strips are planted throughout the irrigation area that will be presented by Klein Karoo Seed (K2) at farmers days.

Since the removal of Steenbras from Small Grain’s irrigation wheat ­package, there was a need for a short growth season cultivar to
replace it. We are now excited to announce that this need has been catered for with the release of the two new cultivars: Renoster and Koedoes – both with short growth periods.

What makes Renoster even more appealing is its short straw. With a straw length of approximately 20 cm to 25 cm shorter than our flagship cultivar Duzi, Renoster will be the first Small Grain cultivar with a plant height this short. Short straw means less crop residues, making Renoster an excellent choice for producers that make use of no-till systems. Even though no-till farming is not standard practice in the irrigation area, there are producers that have started to adopt this way of farming.

The short straw also makes Renoster extremely resistant to lodging, even at higher seeding rates. The optimum seeding density for Renoster is approximately 175 plants/m2 to 275 plants/m2 (± 80 kg – 120 kg seed/ha). When considering planting Renoster, producers should keep in mind that it is susceptible to Fusarium head blight. Proper fungal disease management should therefore
be implemented.

The other new cultivar, Koedoes, has a medium straw length with excellent resistance to lodging. The optimum seeding density for Koedoes is 250 plants/m2 to 300 plants/m2 (± 100 kg – 130 kg seed/ha). Even though both Renoster and Koedoes have short growth periods, Koedoes may in certain areas be a few days faster than Renoster.

Since these two cultivars are harvest ready approximately ten days prior to our other cultivars on offer, producers are able to discontinue irrigation sooner. With drought looming over most of South Africa, this allows producers to use less water.

Producers should keep in mind that the falling number can be affected if these cultivars are still irrigated after maturity. Downgrading as result of over-irrigation has however not been observed, since the falling number was still safe above 250 seconds.

The hectolitre mass for both cultivars is also superior. All of the cultivars in the irrigation packages of ARC-SG have good baking quality and the same applies to Renoster and Koedoes. Both cultivars have been approved by the industry for release and the bread making quality is acceptable for the bakers and millers.

With the correct management, Renoster and Koedoes will prove to be cultivars that producers can rely on. With an excellent combination of beneficial traits and good yield, we at ARC-SG are proud to make these two cultivars available to our producers. 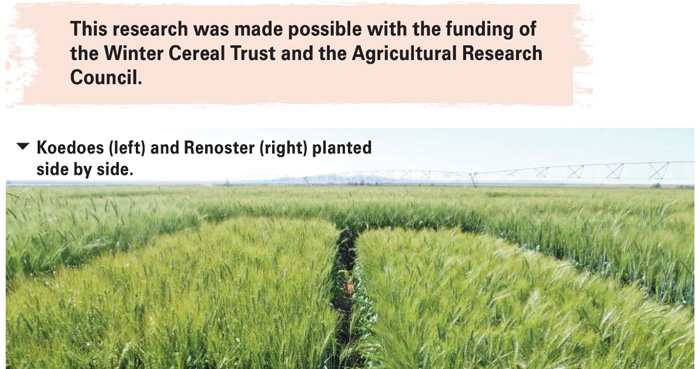 Thabang - May 5, 2020
0
Ideally, every agribusiness wants to position itself to withstand tough environmental conditions, to be able to absorb the volatility of the commodity markets and...