Oilseed crops are the second-largest source of food after cereals, with a large expansion worldwide due to high demand for vegetable edible oil. Sunflower (Helianthus annuus L.) is one of the four most important oilseed plants in the world, along with palm, soybean and rapeseed.

In South Africa sunflower is the most significant oilseed crop – it is the largest source of vegetable oil followed by soybeans and canola. Annually, almost the entire local sunflower crop is intended for the processing industry to be converted to sunflower oil. In the 2018/2019 marketing year, South Africa produced 315 406 tons of sunflower oil, which is the most widely consumed vegetable oil in the country. In the same year 379 395 tons of oilcake were produced.

Oil-type sunflower seeds contain from 38% to 50% oil and about 20% protein. Sunflower oil consists mainly of a combination of mono-unsaturated and polyunsaturated fats with low saturated fat levels, making it a healthy and high performance non-transgenic fat and a desirable option for human consumption. Moreover, studies have shown that sunflower oil is healthier than most other food oils on the market; it is light in taste and appearance and supplies more vitamin E than any other vegetable oil.

The oil concentration of the sunflower seeds at maturity is known to vary among cultivars, therefore much effort by plant breeders are aimed at increasing the oil concentration in mature achenes of modern oilseed cultivars. The oil content and oil yield are complex quantitative traits, determined by genetic and environmental factors, along with interactions between them. 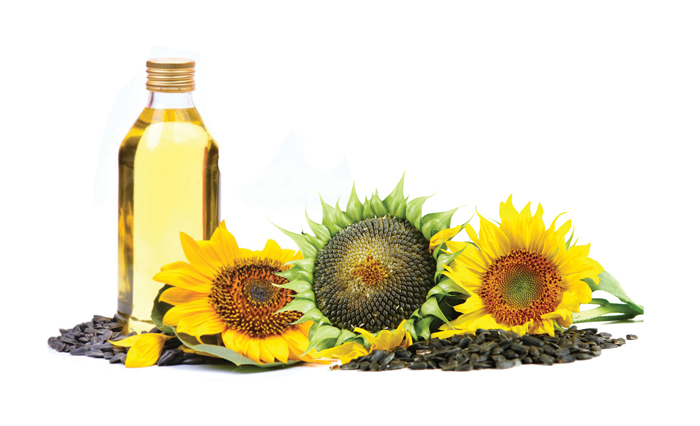 Currently South Africa does not necessarily see higher premiums being realised for a higher oil yield, compared to countries like the United States, where a 2% premium is paid for each percentage point of oil content exceeding 40%. However, good-quality sunflower hybrids can be advantageous to increase sunflower production in South Africa.

The national sunflower cultivar trials conducted by the ARC-Grain Crops assist producers to choose the correct cultivar that is best suited to their respective environments. This in turn ensures higher profits at no extra cost.

To investigate the performance of commercially available sunflower hybrids from different seed companies, hybrids were evaluated for oil and protein content in the Free State and North West. 19 sunflower hybrids were evaluated at seven sites during the 2017/2018 growing season and 24 hybrids were evaluated at six sites during the 2018/2019 growing season. A randomised complete block design with three replicates was executed for each site. Seed yield was recorded for each site individually and seed samples were sent to the Southern African Grain Laboratory (SAGL) for oil and protein content analyses. Seed oil yield was calculated by multiplying oil content (%) with seed yield (t/ha).

Conclusion
This study identified sunflower hybrids that can produce high oil contents in the North West and Free State production areas, that are well above the current norm (36% oil content with moisture percentage of less than 10%) as required for the industry at South African silos.