Bacterial diseases of maize can cause headaches for producers. A recent increase in the incidence and spread of bacterial leaf streak (BLS) makes it important to understand this disease in order to develop management practices for its control. Bacterial whorl and stalk rot can be found throughout the maize production areas of South Africa and periodically cause severe, localised outbreaks.

BLS of maize
The causal organism of BLS is Xanthomonas vasicola pv. zeae. BLS was reported in South Africa for the first time during 1949. To our knowledge, maize (Zea mays) is the only host of X. campestris pv. zeae.

Incidence and distribution
There is a paucity of information regarding BLS and this disease occurred only in South Africa until 2016, when it was also reported in the Corn Belt of the United States. BLS can be found in the warm and dry maize production areas such as the North West Province, Northern Free State and south-west areas of Gauteng. This disease can occur sporadically and environmental conditions play a role in the disease intensity. 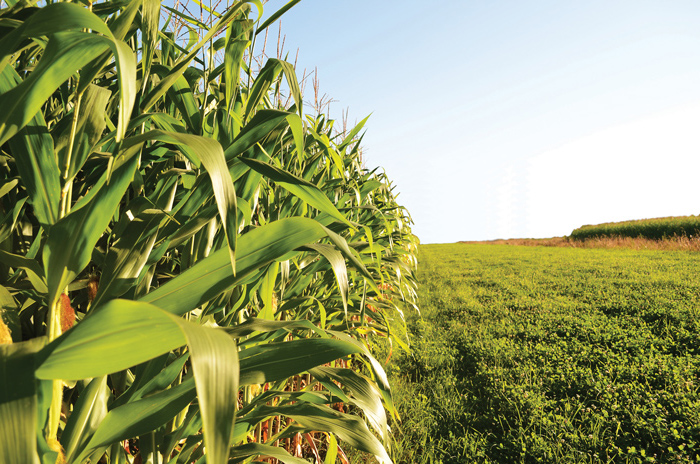 Up to 40% of leaves can brown and dry prematurely (Photo 1), which can lead to reduced grain production. It is possible that BLS can survive on maize stubble and infect maize seedlings (primary infection) when environmental conditions are favourable. Additional sources of inoculum for secondary infection on maize leaves may be bacteria present in irrigation water. Within fields, it is likely that BLS is disseminated by wind, rain and irrigation. It may also be disseminated through feeding of aphids and plant-to-plant contact. The bacterium can penetrate maize leaves through natural openings (stomata); therefore, it is likely that the highest infection occurs at midday, during which the leaf stomata are fully opened. It is not yet known whether BLS is seed-borne. This should be investigated as it could play an important role in future exports.

Disease symptoms
Symptoms can be observed during all growth stages, but are most severe at or after flowering. Initial leaf symptoms appear as dark, oil-drenched streaks. Initial small lesions will enlarge to form narrow, yellow translucent streaks (Photo 2) – 2 mm to 3 mm wide over the whole leaf area. Early infestations of leaves will limit photosynthesis, which leads to limited grain fill. BLS disease symptoms can easily be confused with that of a fungal disease named grey leaf spot (GLS). Although both diseases are restricted by leaf veins, the margins of BLS lesions are irregular, whilst those of GLS have a rectangular appearance (Photo 3). Irregular, yellow translucent streaks caused by BLS can also be confused with sunburn symptoms (Photo 4). Leaves can be examined for the presence of bacteria or fungi to distinguish between BLS and GLS. During severe drought conditions, BLS infection causes paper-thin lesions that may extend across all or much of the leaf blade to form large, necrotic areas resembling drought injury. Infected leaves can appear tattered and shredded following windy conditions.

Control measures
With limited information regarding BLS, we can only make recommendations from experience and knowledge regarding other maize leaf diseases. Presently no commercial hybrids with resistance are available on the market, although huge differences are recorded in fields. We are currently trying to identify statistically sound cultivar trials showing BLS symptoms, in order to record resistance levels. Because maize is the only host of BLS, rotation with non-hosts will reduce inoculum levels. Sanitation of fields is very important, since crop debris and volunteer seedlings are removed, which will reduce the primary inoculum in the following growing season. It is also recommended to fallow fields and let them dry thoroughly to reduce inoculum levels in the soil. It is very important to note that registered fungicides will not control this bacterial disease. The correct identification of a disease whether it is fungal or bacterial, will be key in establishing control measures.

Incidence and distribution
This disease occurs throughout the maize production area in South Africa, periodically causing severe, localised outbreaks. This pathogen has a wide host range, which includes both monocots and dicots. Bacterial whorl and stalk rot of maize are prevalent and damaging in areas with high rainfall and/or irrigation, particularly in poorly drained soils. Moisture collected in the whorl of the plant after overhead irrigation (particularly where nitrogen is applied) or rain/dew is believed to be the major factor causing whorl and stalk rot. More recently, reports of bacterial whorl and stalk rot were also received from dryland fields. Infections during the last and current planting seasons ranged from 0% to 20% with the Vaalharts irrigation scheme showing a 30% infection rate. High temperatures (32ºC to 35ºC) and relative humidity favour development of this disease. The unpredictable occurrence of the disease makes it difficult to control.

Erwinia overwinter in stalk tissue on the soil surface. Wounds caused by hail, strong winds and insects (stalk borers) provide entry sites for infection. Bacteria also enter plants through natural openings such as stomata and hydathodes. Erwinia have not been reported to be seed-borne.

Disease symptoms
Whorl rot
This disease infects whorls of maize plants during the vegetative growth stage. Symptoms can be observed from seedling to flowering stage, but occur mainly from the six-leaf to eight-leaf stage. Water and bacteria accumulate in the whorl. Under extremely warm temperatures, the bacteria multiply rapidly and infection will take place. The uppermost leaves wilt and a slimy, soft rot which imports a recognisable pungent smell in the base of the whorl, develops (Photo 5). The growth point of the maize plant dies and the decay spreads down the stalk causing the plant to collapse. Disease surveys conducted in infected fields showed that rotting of the whorls had a cut-off effect on leaves. Although the growth point still grew, a lack of nutrients due to loss of leaves resulted in poor grain fill and negatively affected yield.

Stalk rot
Primary symptoms generally appear in mid-season when plants suddenly lodge. Initial symptoms are the colouration of leaf sheaths and stalks at internodes. As the disease develops in the stalk, usually from the first to third internode above the soil line, the stalk appears water-soaked (Photo 6), turns tan to brown, and becomes soft and mushy (Photo 7). The stalk will then collapse with vascular strands still intact (Photo 8). Infected internodes emit a typical, strong rotting odour. Bacterial stalk rot can infect the maize plant from any internode at soil level up to the leaves and plumes. Infections higher up in the plant can have a negative effect on plumes and thus also negatively affect pollination.

Control measures
Unfortunately, the unpredictable occurrence of this disease makes it difficult to control. The following points can serve as guidelines to reduce the risk of infestations. Choose well-drained fields or improve drainage to prevent water accumulation. Prevent damage to maize plants during mechanical activities such as weeding, irrigation and fertiliser treatment. Avoid excessive flooding and irrigation of fields, especially during hot hours of the day (32°C to 35°C) and attempt to schedule irrigation times to be restricted to cooler hours. Ploughing to incorporate infected debris into the soil is recommended. Cultivars have not been screened for resistance or susceptibility to bacterial whorl and stalk rot in South Africa. It is obvious, however, from observations and reports that there are genotypic differences regarding stalk and whorl rot resistance. It is important to note that no agrochemicals are registered or are known to reduce disease levels.