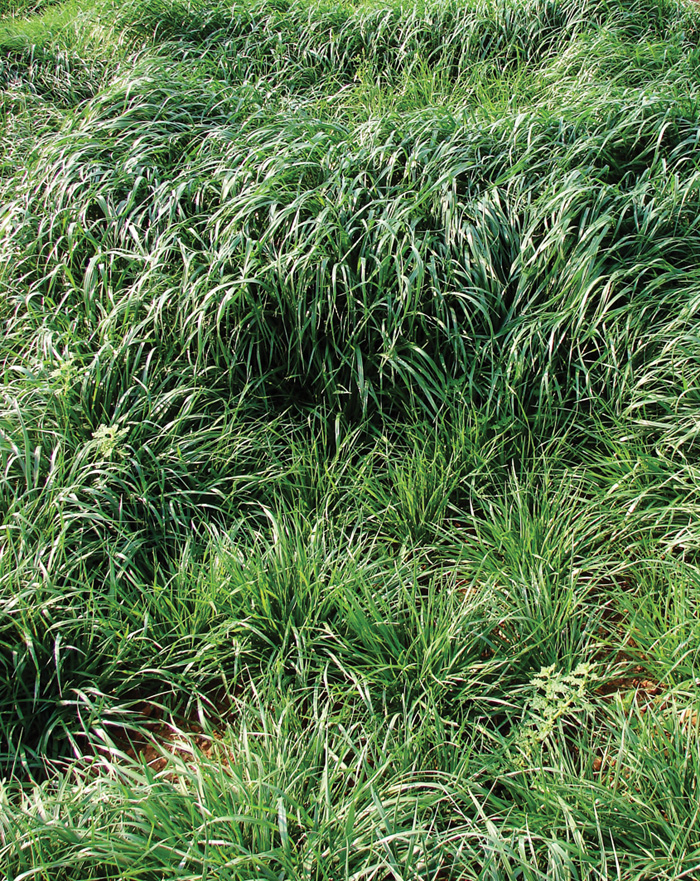 This article is the ninth in a series of articles highlighting a specific pasture crop species that can play an imperative role in CA-based crop-pasture rotations. Besides improving the physical, chemical, hydrological and biological properties of the soil, such species, including annual or perennial cover crops, can successfully be used as animal feed.

Livestock production systems are in many ways dependent on the utilisation of pasture species, in this case as a pasture ley crop, and can therefore become an integral component of CA-based crop-pasture rotations.

It is imperative however to identify a pasture species fulfilling the requirements of a dual purpose crop, i.e. for livestock fodder and soil restoration.

Tall fescue is a very common temperate species with the well-known characteristic of remaining green throughout the winter. This species has often been used to ensure that sufficient green forage is available in the summer rainfall regions throughout the autumn, winter and early spring.

This species unfortunately has the requirement of supplementary irrigation to ensure optimal growth. In an area where winter rainfall is received, this species will benefit tremendously. This temperate species is indigenous to Europe, where it has apparently been produced since 1771.

Tall fescue grows to a height of 1 200 mm and has a typical dark green colour. Research reports indicate that this species has been planted in South Africa since 1909. Some of the important cultivars include Amelie, Demeter, Dovey, Feugo, Emeraude, Jenna, Panatex and AU Triumph.

Tall fescue is a species with a relatively high water requirement of 800 mm and more, but does particularly well with irrigation, since it is a very important species used in fodder flow programmes. It has the ability to grow in dryland conditions in relatively wet areas such as wetlands (vleie).

As previously referred to, tall fescue is well-adapted to heavy clay soils and can survive periods of water-logged conditions. Even though well-adapted to many conditions, it is not recommended to be planted in well-drained highland soils, hot northern slopes or light sandy soils. If there is a requirement to plant this species in the warmer areas of the country, it must be planted in the cooler parts of the landscape, especially on southern slopes.

There is however evidence that tall fescue can perform well in the warmer areas of the country only if water is not limiting. Therefore sufficient water is of utmost importance to ensure survival and optimal production.

Like most grass species, competition with weeds in the young seedling stage is detrimental during the establishment phase of tall fescue. It is recommended that this species be planted in autumn (April/ May and March in very cold areas) and even spring (September/ October), considering very high or very low temperatures kill germinating plants.

When seeded in rows, seeding rates of 10 kg/ha – 15 kg/ha are recommended and when seeded using a broadcasting method, a rate of 20 kg/ha is advisable and under irrigation 30 kg/ha can be used.

Since tall fescue has a high water requirement, it requires soils with very high soil fertility. To meet these high nutrient requirements, fertilisation rates will depend on what the target dry matter (DM) production is which is determined by the amount of precipitation available in the form of rainfall and irrigation.

Generally, soils used for production purposes should be fertilised to maintain soil phosphorus (P) levels of 35 mg/kg soil and potassium (K) levels of 120 mg/kg of soil at a soil pH of 6 – 7. To achieve relatively high dry matter production of approximately 16 tons/ha per annum, up to 470 kg of nitrogen (N) will be required, especially under irrigated conditions.

This nitrogen fertiliser can be applied in two or three applications. It is well-known that irrigated tall fescue under very high fertility conditions with regular defoliation can produce in the order of 12 to 13 tons DM/ha/annum.

This production can decline with infrequent defoliation. Research has shown that irrigated tall fescue/clover mixtures with frequent defoliation can produce 11 tons DM/ha/annum. If short grazing during the warmest summer months is avoided, it will ensure good grazing for the rest of the year.

Tall fescue is also known to be a very good species for foggage purposes and with care, good quality hay can be produced. A very common method of utilisation is by making silage of it, particularly before the stem has completely developed.

When using a temperate perennial pasture in a summer rainfall region, irrigation scheduling is of utmost importance. Grazing this pasture at the correct time to avoid detrimental effects to the viability and performance of the pasture can be regarded as challenging, considering that the pasture remains green in summer, but growth rate is minimal. Incorrect grazing management of this pasture outside its growth period can result in the overgrazing of the pasture.

For the summer rainfall regions this pasture can be used for the winter period if supplemental irrigation is available. It has the ability to utilise the moisture conditions within the irrigation system, especially if grain crops have been cultivated there frequently.

With tall fescue actively growing and the subsequent grazing available throughout autumn, winter and early spring, the benefits of nutrient recycling (dung and urine) and soil disturbance through the hoof action of grazing animals are evident.

These factors can help restore the soil’s condition, created through rainfall and intensive supplemental irrigation over time throughout the normal grain crop growing season.

Considering the maintenance of good soil fertility, it is important that tall fescue is managed for its quality. Tall fescue tends to come into seed in the late summer, when it is often very unpalatable and not the most preferable time for grazing; it should by all means not be grazed if insufficient growth is evident.

Research has shown that with well-managed and regularly defoliated tall fescue, crude protein values of 17,5% – 19,5% , crude fibre values of 24% – 29% and total digestible nutrients (TDN) of 60% – 64% can be achieved with the lowest values in autumn and highest values for late winter and early spring.

Research on the average grazing capacity of tall fescue has shown that it is acceptable to expect to carry approximately 3,5 mature livestock units (MLU)/ha with a live weight gain of 490 kg/ha. With regards to sheep production systems, 20 – 25 sheep/ha can be economically viable.

After establishing a typical ley crop system using tall fescue for a period of around three to five years, the soil should be sufficiently restored to cultivate annual grain crops under a CA system.

Herbicides kill the pasture quickly and the pasture residues remain on the soil surface providing cover that limits erosion, enhance water infiltration and reduces their rate of mineralisation. Once a decision is made to terminate the ley, all pasture components should be considered as “weeds” that need to be removed. They should no longer be regarded as a source of fodder for livestock.

In certain situations/areas, an annual legume could be planted directly after termination of the ley crop, such as grazing vetch (Viciavillosa) as a winter crop or cowpeas (Vicnaunguiculata) and soybean (Glycine max) in the following summer, followed by maize (Zea mays) in the crop rotation.

The water requirement of the first crop planned after pasture will influence the timing of removal of the pasture, especially in the dryer, western grain production regions of South Africa. Reliable and timely seasonal rainfall forecasts may assist in this planning. Following the pasture phase, grain crop yield in dryer regions will be restricted unless the soil water profile is replenished.

After removing the pasture, weeds in the fallow must be controlled to conserve soil water to maximise the benefit of the ley. A suitable no-till planter should be used to plant the grain crops directly into the residues of the pasture crop, without any other cultivation practice disturbing the soil.

Normal integrated fertiliser (based on soil fertility levels and yield targets), weed and pest control practices should be followed. During the transformation phase after newly established CA grain fields (e.g. during the first few years after termination of a ley crop), a 30% increase in N fertilisers is recommended on maize due to the immobilisation of N in the soil.

Thereafter the availability of N to the plant should be assessed through an appropriate analysis and the fertiliser application should be adjusted accordingly.

In a fodder flow programme of an animal production system, tall fescue is regarded a very important pasture, as it fills the gaps of pasture demand at times when sub-tropical pastures are not growing optimally or not having the best quality.

The major requirement however, is that this species needs sufficient water and if water is limited, this species will not grow well and is not the most suitable species for a livestock production system. When situated in a winter rainfall or all year round rainfall region, then without a doubt this species can be used with much success with the correct grazing management strategy.