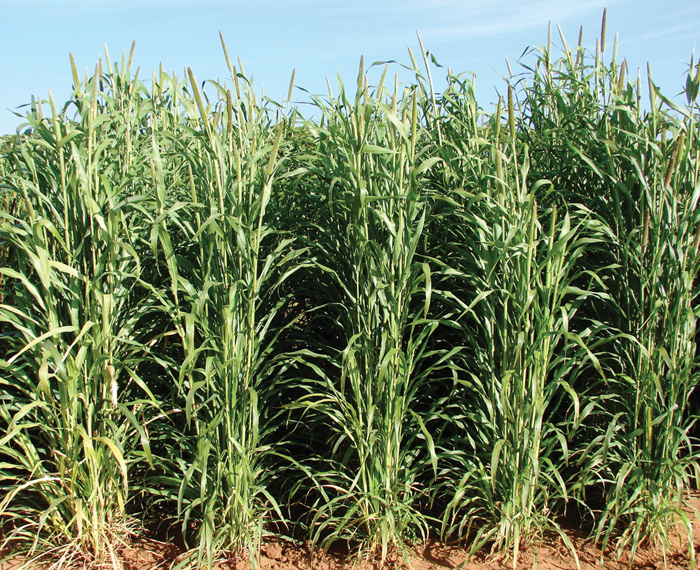 This article is the tenth in a series of articles highlighting a specific pasture crop species that can play an imperative role in CA-based crop-pasture rotations. Besides improving the physical, chemical, hydrological and biological properties of the soil, such species, including annual or perennial cover crops, can successfully be used as animal feed.

Livestock production systems are in many ways dependant on the utilisation of pasture species, in this case as a pasture ley crop, and can therefore become an integral component of CA-based croppasture rotations. It is imperative however to identify a pasture species fulfilling the requirements of a dual purpose crop, i.e. for livestock fodder and soil restoration.

This article focuses on an annual pasture crop commonly used in a short, one summer season rotation as a cover crop, either succeeding a winter annual species cover crop with green manuring properties or being succeeded by the latter crop mentioned.

Annual fodder cops are sometimes classified as expensive, because of the annual seedbed preparation and establishment. The higher production and palatability of newer Pearl millet cultivars might oppose this statement. Gerber et al. (2006) and Robertson et al. (2009) reported that the production, palatability and quality of newer annual summer cultivars make it popular crops for intensive animal production systems.

Pearl millet was introduced in the 1850s as forage used in the Gulf Coast states. It originated in central Africa and is also found in the drier tropics and parts of India. In South Africa, Pearl millet is produced in the Free State, Limpopo and KwaZulu-Natal. Common cultivars used locally include Milkstar, Hypearl millet, common babala, Nutrifeed and Speedfeed.

Even though this species is often known for its drought resistance, a uniformly distributed rainfall during the growing season is desired. With regards to too much rain during the reproductive stage of the plant, crop failure is most likely possible.

Pearl millet is sensitive to low temperatures especially at critical physiological growth stages such as seedling and reproductive (flowering) stages. High temperatures are needed for the grain of this species to mature. When seeded, Pearl millet germinates well at soil temperatures of 18°C – 29°C and emergence can occur in two to six days in favourable climatic conditions. Planting in cooler soils can cause problems with reduced emergence and greater competition from weeds.

Pearl millet does not have any difficulty with establishment. It is common practice to either sow this species in a broadcast fashion or plant it in rows. Planting in rows is recommended for areas that receive less than 700 mm of rain. Recommended seeding rates for rows (0,9 m): 5 kg/ha – 15 kg/ha, 15 kg/ha – 25 kg/ha for broadcasting and as high as 30 kg/ha under irrigation.

As Pearl millet is adapted to a variety of soils, it is important to ensure a moderate level of phosphorus (P) and potassium (K) for good production. Top dressing with nitrogen (N) (± 40 kg – 70 kg N/ha) taking rainfall and growth stage into account, can result in great yields of good quality.

In a high rainfall season (± 1 200 mm/year) Pearl millet can produce as much as 12,9 tons/ha when it is defoliated frequently (every four weeks). The highest producers under these conditions were Milkstar, Speedfeed, Hypearl millet and even common babala.

The regrowth distribution during a wet growing season differs between cultivars. Milkstar and common babala grow faster in December and January than in February and March (early season cultivars).

In a lower rainfall season (± 750 mm) the Pearl millet production values varied between 4,3 tons/ha – 5,6 tons/ha, if defoliated monthly. There was no significant difference in production between different cultivars and planting dates. During this season, Milkstar and Hypearl millet were the early production cultivars, while Nutrifeed and common babala will have a slower start, with a production peak in February/March. Speedfeed peaked in the middle of the growing season (end of January). Robertson, Botha and Gerber (2009) reported a production of 8,4 tons/ha for Hypearl millet tested on the Outeniqua Experimental farm (Western Cape), with a long term average rainfall of 728 mm/year.

Planted as late as January, Speedfeed and Milkstar can produce more than 13 tons/ha for ensiling. Under these conditions the same cultivars can be used as foggage.

Fast growing annual pasture species such as Pearl millet, can have a few management challenges. Often it is seen that the peak growth rate of this species can result in the pasture growing faster than the speed at which animals can graze and a sudden decrease in palatability and quality is expected, resulting in a higher percentage of plant material being selectively grazed.

The secondary effect of a too tall stand of Pearl millet is a much slower regrowth rate once defoliated. There also exists the risk of nitrate poisoning as a result of too high N-applications under sub-optimal growing conditions. The pest control in millet production will entail dealing with stinkbug, nematodes, chinch bug and birds.

A seasonal rotation cover crop such as Pearl millet can play an imperative role in improving soil structure, water infiltration and root penetration.

Additional benefits include reduced soil crusting, soil erosion, runoff and nutrient leaching. This species can also provide an affordable on-site management option to enhance the inherent soil organic matter through an extremely vigorous root system and secondly, it is a suitable option to dry out very wet soils that are regularly irrigated either in winter or summer.

From an animal production perspective, the forage quality that can be obtained from good management of Pearl Millet is a crude protein (CP) content of between 9% – 13% (unfertilised soils) and 13% – 24% (fertilised soils), all depending on nitrogen fertilisation in conjunction with sufficient moisture.

It can be established in a pure stand or in a mixture with other (cover) crops or as a full-season crop to maximise its beneficial properties. Babala can be used for a short period of time in the spring before the cash crop, or later in the fall after a main crop has been harvested.

In South Africa, where crop rotations are mostly very tight, it is often easier to insert a fall cover crop after the harvest of a short-season cash crop or silage; provided there is enough time, nutrients and soil water for it to establish before early fall frosts.

In certain situations an annual cold season legume (or mixture) could be planted directly after termination of the cover crop, such as grazing vetch (Vicia villosa), oats and radish, followed by a cash crop.

Normal integrated fertiliser (based on soil fertility levels and yield targets), weed and pest control practices should be followed. During the transformation phase after newly established CA grain fields (e.g. during the first few years), a 30% increase in N-fertilisers is recommended on maize, due to the immobilisation of N in the soil. Thereafter the availability of N to the plant should be assessed through an appropriate analysis, and fertiliser application should be adjusted accordingly.

Babala should preferably be flattened with a knife-roller at silking or flowering stage before it produces viable seeds which could become a weed. Herbicides could also be applied when necessary to kill regrowth quickly. The cover crop residues remain on the soil surface providing cover that limits erosion, enhance water infiltration and reduces their rate of mineralisation.

Pearl millet is an annual summer grass that is well-adapted to well drained areas and grows well on poor and infertile soils, as well as highly fertile soils. It can either be used for hay, silage, foggage or can be grazed too. Because of this species’ high nutritive value, it is a recommended species to provide high quality pasture without significant amounts of fertiliser needed, especially if it is being planted in crop rotation with crops that receive high levels of fertiliser and irrigation.

This species provides the opportunity to remove excess levels of nutrients in the soil as well as drying out extremely wet soils. Very few anti-quality factors occur within this species, however nitrate poisoning is a potential threat in well-fertilised pasture stands, but unlike sorghum, Pearl millet is safe for horses.

Important characteristics of new cultivars are: