The Zunckel family farms near Bergville in KwaZulu-Natal and Warden in the Eastern Free State with maize, soybeans, dry beans and wheat. Livestock also forms an important part of the farming operations.

Tyson Zunckel was the winner in the maize category for KwaZulu-Natal, with a yield of 13,8 t/ha. He planted P 1197, a yellow Pioneer hybrid. In Bergville, maize, soybeans, dry beans and wheat are planted on a rotational basis in a no-till system. They plant maize for two years, soybeans for one and after soybeans they plant wheat under irrigation and cover crops on the rest of the dry-land fields. 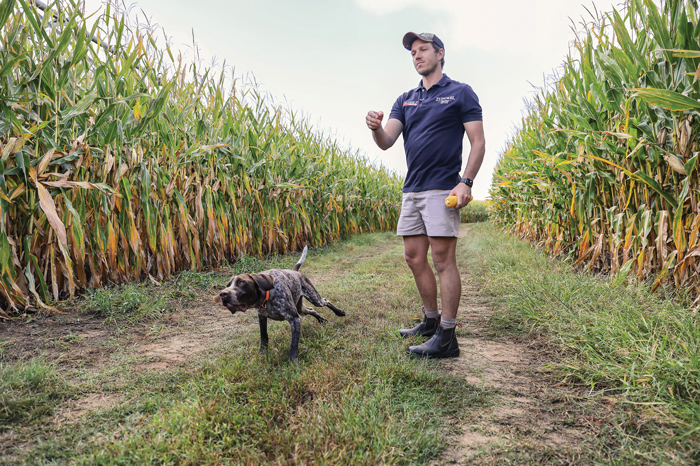 They emphasise that their footprints in the fields are key to achieving success. ‘Although the chemical representatives can provide recommendations, you have to be out there in your fields to see and know what the exact situation is. It is important to listen to the agents, but our own observations are equally important.’

Focus is placed on restoring the carbon and organic matter in the soil. Soil bacteria and fungi work in tandem to make minerals and nutrients in the soil available to the plant. This enables plants to take up the nutrients via their root systems. By restoring soil health, they manage to have healthier plants that can take more carbon from the atmosphere into the soil via photosynthesis.

‘We believe in minimum soil disturbance and chemical use and want to regenerate the soil – therefore basing our farming on what is best for the soil and soil health. We brought in crop diversity on a rotational basis, including cover crops to get maximum cover on the soil, either with living plants or with plant residues and to always have a living root system in the soil. We believe that the plant’s root systems and the microbes and bacteria living amongst the roots contribute largely to more healthy soil and to better soil structure. These practices have helped to reduce soil erosion and to increase water infiltration and moisture retention in the fields, leading to improved yield and sustainable production over time,’ he says.

‘Our efforts paid off – we can see the difference in the soil. The soils are darker and softer, containing more organic matter. Soil samples also showed that we have increased the carbon in the soil over the past ten years.’

Tyson applies lime and nutrients on the surface, according to the results of the grid sampling they do on a four-year rotation basis. Samples are taken from the topsoil and subsoils with grids of 1 ha and 2 ha respectively. The results from soil samples determine how they write the variable rate prescriptions for each field. Leaf analysis will determine if and which foliar feed application they will give during the season to rectify shortages in the plants.

With precision planting they can also vary the planting rate for the irrigated part of the field where the centre pivot will be and the dry-land parts in the corners of the fields.

Climate presents their biggest challenge and they adapt by adjusting their plant population per field as well as planting dates where possible. But focussing on restoring and maintaining soil health mitigates many of the effects associated with lower and late rainfall due to the ability of the soil to retain moisture for longer periods of time.

‘If you want to change to a minimum or no-till system, start by changing your practices. We adjusted our mindset on cultivation practices and invested in the equipment over time. Be patient. Soil needs to gain better organic matter and the mulch needs to be built up – that takes time. Although we increased our profitability in the long run, we focussed more on what was right for the soil, imitating nature. As time went by we have also reaped the rewards regarding profitability.’

Tyson stresses that farming must be a passion. ‘Operating in an industry with so many uncontrollable factors such as the weather, politics, input costs, pests and diseases and fluctuating grain prices, farming remains a labour of love. If farming is not your passion, you will not make a success in the long run.’