To state that Johan Kriel, former development coordinator of the Grain SA Farmer Development Programme, has a heart for agriculture, is an understatement. Agriculture is his life. After having to sell their family farm in the Clocolan area, he found another way to continue his agricultural journey. He joined the Grain SA team and helped to bring the dreams of beginner farmers into fulfilment.

A job ignites a passion
Johan joined Grain SA in 2006 and now – after having travelled more than a million kilometres on Free State roads to help equip farmers – he is retiring. Looking back on his career, he says that farming will always remain his first career choice. However, he adds that the position at the development programme has changed his life. ‘If I could have my life over, I would have preferred to keep on farming, but after my time at Grain SA I would also want to work with beginner farmers again. I spent my days making a difference in people’s lives. It grew from being just a job into being my passion.’

Hard work brings success
For Johan it was wonderful to find that he had won the trust of the farmers within two or three study group sessions. It was also humbling to see how anxious they were to learn more in order to improve their skills and to get their farming operations going. This in spite of immense problems like not being able to get title deeds, not having access to production credit and not having any form of mechanisation on the farm.

Johan’s time as development coordinator was filled with highlights. At the top of the list was witnessing two second-generation farmers take over farming operations from their fathers. ‘To begin mentoring someone with very little knowledge about farming and ending that journey with a next-generation farmer taking over the operation from his father, is indescribable,’ he shares with pride. 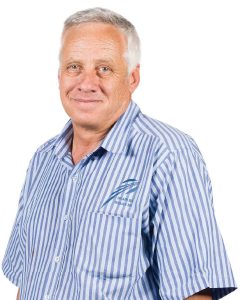 One of these success stories is William Matasane, who farms in the Senekal district. He was one of the first farmers Johan took on board. This former waiter was crowned the Grain SA Emerging Farmer of the Year winner in 2010. ‘His son, Johannes, has helped his father on the farm from an early age. He has now completed his BAgric studies and will join William on the farm.’

The other is Koos Mthimkulu (also from Senekal) who won the award in 2011. His son, Clifford, took over the farming operation about six years ago and is now a finalist in the Farmer of the Year competition.

In the Tweespruit region, Frans Makoena began farming on just 58 ha in 2000. Johan is thrilled to have been part of this success story and shares in Frans’s excitement of planting nearly 1 500 ha this season.

The relationships that were formed are also on his list of highlights, as are some life-changing farming moments. One of these is about a farmer whose pivot system hadn’t worked for 18 years. ‘When we eventually managed to get it going, he jumped off the tractor, ran and stood under the irrigation water because he was so happy.’ Sadly, this farmer passed away after only seeing his irrigation system in action for three seasons.

Being the change we want to see
At birth Johan was given the Sotho name, Moeketsi (meaning to ‘add on’), as he was the second-born child. In his time as development coordinator he has definitely ‘added on’ by bringing hope to beginner farmers and helping them believe in themselves. He has helped to build relationships between developing farmers and commercial producers – ensuring that agriculture benefits in the process.

He is especially pleased that his time as development coordinator gave him the wonderful opportunity to get to know the Free State. ‘I don’t think there is a town in the province where maize is produced which I did not visit since I started in 2006.’

He can’t recall how many farms he visited, but wherever he went, he encountered kindness, acceptance and incredible support from the beginner farmers.

Through the years he tried to guide the mentees by imparting these three important rules:

He hopes to remain involved in the development of emerging farmers and that South African producers across the spectrum will learn to speak the same language. ‘I believe that if everyone involved in agriculture can stand together as one – as partners with the same goal – we can bring about change and make a success of this country.’

Johan once described a mentor as follows: ‘A mentor is a father, a grandfather, a shoulder to cry on.’Ntate Kriel or oom Kriel – as he is fondly called by his mentees – was, however, much more than this. As mentor he became a brain to pick, an ear to listen, and someone who would push his mentees in the right direction so that they could reach their potential.