Home ON FARM LEVEL Maize crop in the spotlight

The 2018/2019 maize production season is represented by the results of the 22nd annual maize crop quality survey. A total of 808 composite samples, representing white and yellow maize from 28 of the 36 production regions in South Africa, were received and analysed to determine the quality. The samples consisted of 404 white and 404 yellow maize samples.

RSA grading quality
The maize crop was of below average quality as far as white maize was concerned, with only 58% of white maize graded as maize grade 1 (WM1). Last season this figure was 78%. The yellow maize was of average quality with 76% graded as grade 1 (YM1), compared to the 89% of the previous season. Please see Graph 1 for the percentages of grade 1 samples (white and yellow) per season since commencement of the annual maize crop quality survey in 1998.

Furthermore, the number of samples downgraded to class other maize (COM) as a result of the percentage foreign matter exceeding 0,75%, increased from four each for white and yellow maize during the previous season to 23 samples for white and 18 samples for yellow maize. Only one white and one yellow maize sample each were downgraded to COM as a result of other colour maize that exceeded 10% and 5% (maximum permissible deviation for grade 3) respectively. The average percentage combined deviations of white maize was 9,3% compared to the 5,9% of the 2017/2018 season and that of yellow maize was 5,7% compared to 5,1% previously. 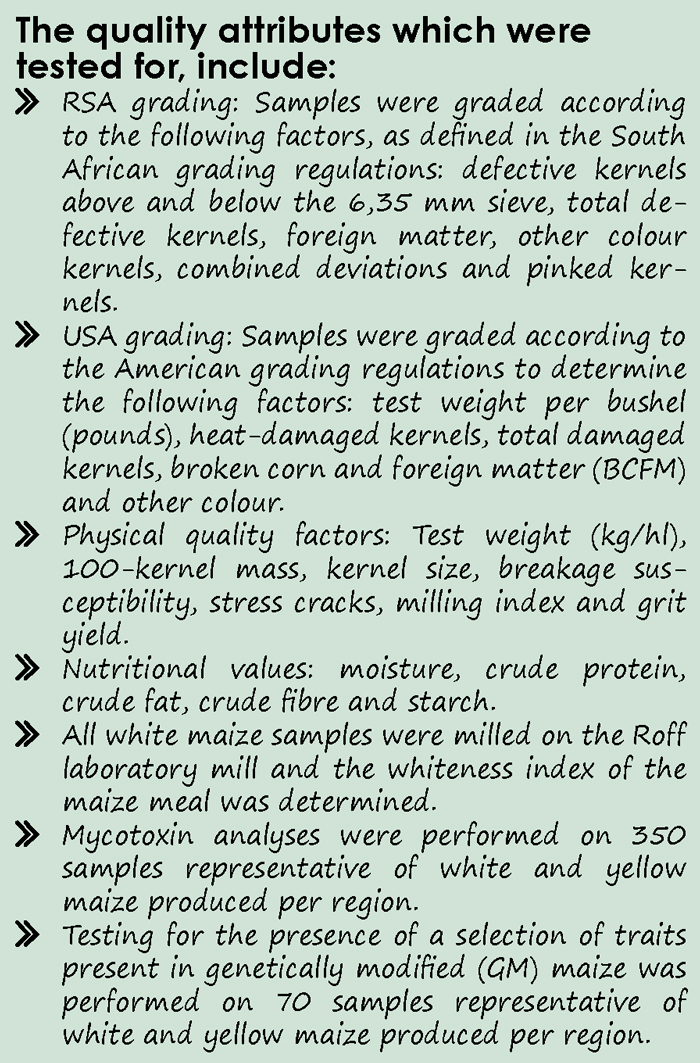 Both white and yellow maize were more susceptible to breakage than during the previous season (white maize to a greater extent). The percentage stress cracks observed varied overall from 1% to 58% and averaged 17% for white and 13% for yellow maize. The average stress crack percentages were the highest of all the seasons since 1999/2000 when stress crack analyses were commenced. Stress cracks are determined by visual inspection of 100 whole maize kernels, examined on top of a light box, for small internal cracks in the endosperm. Some kernels may have two or more internal cracks. Any form of stress may cause internal cracks, for example rapid moisture loss in the field, during harvest or during drying.

Roff milling and whiteness index
The average percentage extraction of total meal in white maize obtained with the Roff mill, averaged 76,0% (3,1% lower than the previous season) and varied from 67,7% to 80,5%.

The higher the WI value obtained, the whiter the meal sample. The main contributing factors causing differences in WI values are the presence of other colour maize like yellow maize, the presence of defective kernels, the type of cultivar as well as the soil composition. The two samples with the lowest sifted WI values this season, namely -7,67 and -5,19, also had the highest percentages total defective kernels (96,7%) and other colour maize (12,9%) respectively.

Nutritional values
The maize industry requested that crude fibre be added to the scope of analysis performed on the annual maize crop quality survey. With the assistance of FOSS, a calibration for crude fibre was developed and added to the existing calibration on the Infratec 1241 grain analyser (NIT) during the previous season. The calibration is updated annually with the latest season’s results. Results are reported on a dry basis.

Mycotoxins
350 samples were tested for aflatoxin B1, B2, G1, G2, fumonisin (FUM) B1, B2 and B3, deoxynivalenol (DON), 15-acetyl-deoxynivalenol (15-ADON), ochratoxin A, T-2 toxin, HT-2 toxin and zearalenone (ZON) by means of a multi-mycotoxin method using UPLC – MS/MS. The occurrence of these mycotoxins was monitored in the South African maize crop at harvest over the past nine seasons and notable trends are observed.

An increase in the mycotoxin occurrence was observed in all seven major maize production provinces in South Africa this season. The percentage samples with one or more mycotoxins present in the different provinces, showed notable differences and the trends in occurrence confirmed that mycotoxin risk varies significantly between production regions, production seasons and maize class. The following results and notable trends were observed this season:

Ochratoxin A, T-2 toxin and HT-2 toxin
None have been reported in South African-produced commercial maize since 2010/2011.

15-ADON is always only present in samples that contain DON, mostly when the DON concentration is more than 500 µg/kg. In this season, only 17,7% of the 350 samples tested contained 15-ADON, with a mean concentration of 218 µg/kg.

Fumonisins
(FUM total = FB1 + FB2 + FB3)
Slightly more yellow maize (48%) than white maize samples (38%) contained fumonisins this season, similar to the previous two seasons. Only 0,6% white and 1,1% yellow maize samples were contaminated with more than 4 000 µg/kg FUM (4 000 µg/kg is the regulated maximum allowable level for FUM B1 + B2 in unprocessed maize for human consumption in South Africa). The concentration ranges of the samples with fumonisins over the past six seasons are summarised in Graph 6 (white maize) and Graph 7 (yellow maize).

In yellow maize the mean FUM concentration ranged from 207 µg/kg in the Free State to 2 143 µg/kg in Mpumalanga and only increased in two provinces, namely Mpumalanga and Gauteng.

Zearalenone
For the first time since this survey started nine years ago, zearalenone was found in Limpopo, namely 33 µg/kg in one white maize sample. The highest concentration ZON in an individual sample (957 µg/kg) since 2010/2011, was reported this season in yellow maize from KwaZulu-Natal.

Maize imports and exports during 2019/2020
A total of 509 684 tons of yellow maize were imported from Argentina and Brazil for local use during the period 27 April 2019 to 24 April 2020 according to figures obtained from the South African Grain Information Service (SAGIS). No white maize was imported during this period. 42 samples, 37 representing imported Argentinian maize and five representing imported Brazilian maize, were received at the SAGL for quality analysis purposes. The results of the quality analyses performed on the imported maize are compared to those of the local maize crop of the corresponding grade and period (2018/2019 production season).

Multi-mycotoxin analyses were done on nine Argentinian and one Brazilian composite sample per shipment. The mycotoxin results did not raise any major concerns. The fumonisin and DON residues on all but one sample from Argentina were well below the national maximum fumonisin (B1 + B2) level for raw maize intended for further processing.

Sincere appreciation to the Maize Trust for financial support of these annual surveys and to the members of Agbiz Grain for providing the maize crop samples.