Few countries in the world can compete with South Africa’s wildlife wealth: We have around 24 000 indigenous higher order plant species, over 900 bird species, more than 400 mammals as well as a rich diversity of frogs, fish and reptiles. Even the arid regions like the Karoo and Kalahari are blessed with a diversity of wildlife. Conservation of our natural resources is enshrined in the Constitution of 1994, so it is our obligation as citizens, the state and government to take care of the biodiversity. Wildlife all over the world is facing a cataclysmic decline – so much so that iconic species like the African lion, the Bengal tiger and all rhinoceros species may disappear from the face of the earth within the next five decades.

The impact of poisoning
Wildlife poisoning is one of the most serious impacts that animals and plants are facing. Most people do not understand that plant ecology is probably more important for biodiversity than the animal ecology, hence very little attention is paid to the impact of herbicide misuse on plants. Whether an animal or plant is poisoned is immaterial – the fact remains that an essential organism is taken out of the ecosystem – leaving a void that human beings cannot fill. Poisoning can literally wipe a species off the face of the earth; the wanton use of diclofenac drove most of the vulture species in India to the verge of extinction in a decade.

Poisoning: Evil habits or simple mishaps?
Poisoning is not unique to South Africa. Since the earliest times, human beings have used poison to not only kill animals, but also to settle personal feuds with each other. In 1913 the then Union of South Africa issued a declaration to producers to poison wildlife such as most predators, eagles and vultures with strychnine that was provided by the state. A bounty was paid by the state for heads and tails of such poisoned wildlife. One would think that the growing environmental conscience would have put a stop to wanton poisoning by now, but it is not the case.

There is hardly a wildlife poisoning that can be labelled as a genuine mishap. Perhaps, with some empathy towards the individuals responsible for such mishaps, one could refer to incidents such as the one in which bees were poisoned in the Western Cape in 2018 as a result of an insecticide used to control ants in vineyards. The bees were attracted to the sugar that was added as a lure for the ants. No one had any intention to poison bees and the immediate removal of the sugar stopped the bee poisoning completely.

Wildlife poisoning can be attributed to two possible scenarios: Either deliberate and unlawful poisoning or deliberate misuse of pesticides, even though the intention is not to poison wildlife. The latter is very often overlooked because the effects are not as devastating as a deliberate poisoning. A good example is when bromacil (herbicide) is applied against label instructions in sensitive habitats. When the rains come the herbicide migrates rapidly away from the point of application to kill even the hardiest of trees at distances of up to 300 meters. Another example is where rodenticides are used without bait stations to control gerbils. Other animals like antelope eat it and become poisoned. Even though the impact is often overlooked, it is still an impact on the ecosystem that may be very difficult to restore. Shepherd trees that were killed in the bromacil incident may never be seen again in our lifetime in that area.

The worst form of wildlife poisoning is when someone targets an organism in a highly irresponsible manner with a pesticide. A landowner close to Aliwal North poisoned a calf carcass with a pesticide and the next morning a leopard was found dead next to it. According to the family they never even knew about the existence of leopards in the area. On 13 December 2013 a colleague and fellow conservationist, Kare Webster, found 65 Cape griffon vultures dead on a farm close to Molteno. They succumbed to carbofuran that was put into sheep carcasses to kill jackals and stray dogs. The same happened a year later when Cape griffon vultures were poisoned in the Swartberg area of KwaZulu-Natal. Producers called from far and wide to express their absolute dismay at the loss of over 60 vultures. Another incident occurred close to Richmond in the Karoo, in which more than 200 blue cranes were poisoned – deliberately – with diazinon. Just imagine the national bird lying in blue flocks in the Karooveld, wasting away in the wind.

It is undisputed that predation is a serious issue for small stock, cattle and wildlife producers, but to take to poisoning is no longer acceptable. There are many management tools available to combat predation and most producers manage predation in an environmentally sound fashion. It is a punishable offense in terms of several acts to poison wildlife, but it is also a crime against the earth to deliberately poison wildlife.

Something that is increasing alarmingly is poachers using poisons to kill animals like lions, elephants and rhinos. A secondary activity which is even more disturbing, is that they poison such animal carcasses to kill vultures. This is a mitigation measure deployed by poachers to prevent game rangers from becoming aware of poached animals; vultures descending upon a site or rising is an indication to rangers that an animal has been killed. A single incident in Botswana in recent months saw over 600 vultures killed in one foul swoop with carbofuran. 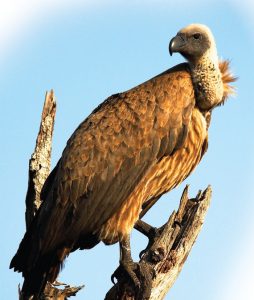 Where do the poisons come from?
The most commonly used poisons in wildlife poisoning incidents are agricultural remedies, notably the older carbamates and organophosphates, most of which are used in crop production today. Pesticides like aldicarb and methomyl are also smuggled in from Zimbabwe by crime syndicates who target valuable wildlife. Aldicarb has already been banned in South Africa – even the possession thereof will land one in jail. However, with a non-existing border between South Africa and Zimbabwe, it is very easy to walk across the Limpopo River with a load of aldicarb and go unnoticed by the law enforcement agencies.

The Fertilizers, Farm Feeds, Agricultural Remedies and Stock Remedies Act, 1947 (Act No. 36 of 1947) is very lenient on who may acquire a pesticide. It only demands that whoever buys a pesticide and uses it, does so in accordance with label instructions. It does not prohibit anyone from buying a pesticide per se and that is perhaps an issue that needs to be reviewed. A person should not be able to be in possession of a pesticide for which he cannot provide substantial evidence for an immediate need thereof. Why is it possible for a livestock producer in the middle of the Karoo to be in possession of carbofuran that is strictly for crop production? There is only one reason and that is to poison wildlife. When a maize producer uses carbofuran according to label instructions, the risk of wildlife poisoning is nil. Perhaps it is time to review the laws that govern pesticides.

The solution to wildlife poisoning
Preventing wildlife poisoning is a mammoth task of which the easy part is working with normal, productive salt-of-the-earth South African producers. Most important is to stick to label instructions which include following the warnings and precautions as well as locking pesticides away when not in use. Secondly, farm workers have to be trained on the safe handling and use of pesticides. They need to be warned against the crime syndicates who may target them to unlawfully get their hands on these products. This should prevent a large percentage of mishaps in which wildlife may be poisoned.

The problem escalates to insurmountable when it comes to those who wilfully and deliberately poison wildlife. It is interesting to note that virtually all the reports of wildlife poisoning that are received come from producers, indicating that the broad-based farming community is opposed to wildlife poisoning. What is near impossible to achieve is identifying the crime syndicates that poison the iconic species as they operate in military fashion under the cover of darkness when most people are fast asleep.

It is also time to add drastic measures to the biodiversity laws and to Act No. 36 of 1947 to curtail the misuse of pesticides and other poisons. The maximum penalty under Act 36 is a lean R1 000 fine and/or two years imprisonment, while the biodiversity conservation legislation leaves one huge loophole: It does not cater for a by-catch. This means that if a culprit poisons a carcass to kill predators and vultures are killed, his defence will be that it was not his intention to kill the vultures. It makes a mockery of the prosecution of such criminals. Change the laws, nail the culprits!

Banning pesticides?
Certain conservationists plead that pesticides that are used in wildlife poisoning should be banned. The question is, what effect will it have? It will remove tools that are required by law-abiding producers for legitimate purposes such as crop production. We have already learnt a lesson when aldicarb was no longer registered in South Africa; the poisoning brigade turned to other pesticides like methomyl and terbufos. Although banning is therefore not an option, severely restricting access to such products may have a positive effect. If a person is caught walking in the Kruger National Park with a legitimate and labelled container full of oxamyl, it should immediately be an offense – as such a person is in the park unlawfully and has no lawful reason to be in possession of methomyl.