Cob and tassel smut on maize, also known as maize head smut, is caused by the fungus Sphacelotheca reiliana (syn. Ustilago reiliana) and occurs in South Africa, Australia, Mexico, New Zealand, Asia and Southeast Europe. This disease was a major threat to maize production throughout South Africa during the late 1970s and early 1980s, where dramatic yield reductions were observed due to serious epidemics throughout production areas.

Resistant maize hybrids that were developed through maize breeding programmes were introduced into the market to successfully control these early epidemics. The disease was largely non-existent in the seasons following this epidemic due to very low natural inoculum levels. This highlighted the success of controlling the previous epidemics with seed fungicide treatments in combination with resistant hybrids.

In the last eleven to twelve production seasons, cob and tassel smut epidemics have occurred sporadically with significant seasonal variations. Epidemics have been prominent in certain areas in Mpumalanga, particularly the clay soils in the Standerton area, where the disease has resulted in major yield losses in epidemic seasons. The primary reasons for these epidemics were the gradual introduction of high-yielding but susceptible hybrids as well as weather and soil conditions that have been favourable for infestation of the seedling by the disease spores and systemic growth of the pathogen in the maize plant.

This disease is cyclical in nature. After the epidemics in the 1970s and early 1980s the inoculum in previously infected fields was reduced to such low levels that infection could not take place even in seasons favourable for disease development. These natural inoculum levels were depleted to such an extent that hybrid screening under natural conditions were difficult to conduct. Unfortunately, some hybrids emerged that were susceptible due to the inability to adequately screen them. This resulted in a gradual increase of inoculum in certain areas, resulting in smaller epidemics in specific areas, once again causing significant losses. This is where the entire cycle repeats itself. There are already signs that the recent epidemics are well managed, largely due to the use of resistant hybrids in specific areas and fungicide seed treatments.

Symptoms
Disease symptoms develop, as the common name suggests, on maize ears and tassels. Powdery spore masses develop on infected ears, which appear round and swollen and lack silks (Photo 1). As soon as the infected ear ruptures or is opened, a black powdery spore mass can be observed. Tassel infections vary from a few individual spikelets (Photo 2) on the tassel (florets) to the entire tassel, which may also form leafy structures (Photo 3). Plants with tassel symptoms will always have infected ears due to the upward systemic growth of the fungus behind the apical meristem of the maize plant. After infection of the tassel, the fungus will pass the ear primordium, thereby resulting in ear smut. Other symptoms include poor seedling germination, aborted ears, stunting (often more than 50%) (Photo 4) and excessive tiller formation.

Economic importance
Infection in a developing maize ear destroys the grain. A 10% infection results in a 10% yield loss. Harvested grain contaminated with spores (Photo 5) is downgraded when delivered to the silo, resulting in further financial losses. Continued planting of susceptible maize hybrids and extended conditions favourable for disease development will result in higher initial inoculum levels, which may put maize production in infested areas at risk.

Epidemiology
S. reiliana is soil-borne and spores are wind- and seed-dispersed. Fungal spores overwinter in soil and may remain viable in the soil for many years. Soil temperature (21ºC to 28ºC) is critical for infection of maize seedlings. Moderate to low soil moisture levels (below 50% field capacity) and acid soil conditions (pH 5,5) favour infection. The fungus’ mycelia grow systemically behind the growth point of maize plants until sexual maturity of the crop, after which the fungus erupts in the ear and tassel tissues. These infected maize tissues develop galls and produce spores, which is then released into the air or cling to harvested seed only to repeat the cycle of infection.

Control measures
Resistant hybrids
Public and private breeding programmes identified useful sources of resistance and were responsible for reducing the impact of the epidemics observed during the 1970s and 1980s. The disease was under control until the recent recorded outbreaks. Selection of resistant hybrids is the most sustainable control option for this disease. Resistance in extensively grown crops, such as maize, is generally the cornerstone upon which integrated disease management systems are developed. Cultivar reactions for the short (Table 1 to 3) and medium/long season maize hybrids (Table 4 to 6) were screened over a number of seasons and localities. The results for the last three seasons of screening are shown in this article and indicate adequate variation in susceptibility to assist in controlling cob and tassel smut together with other control practices to develop an integrated disease management system. 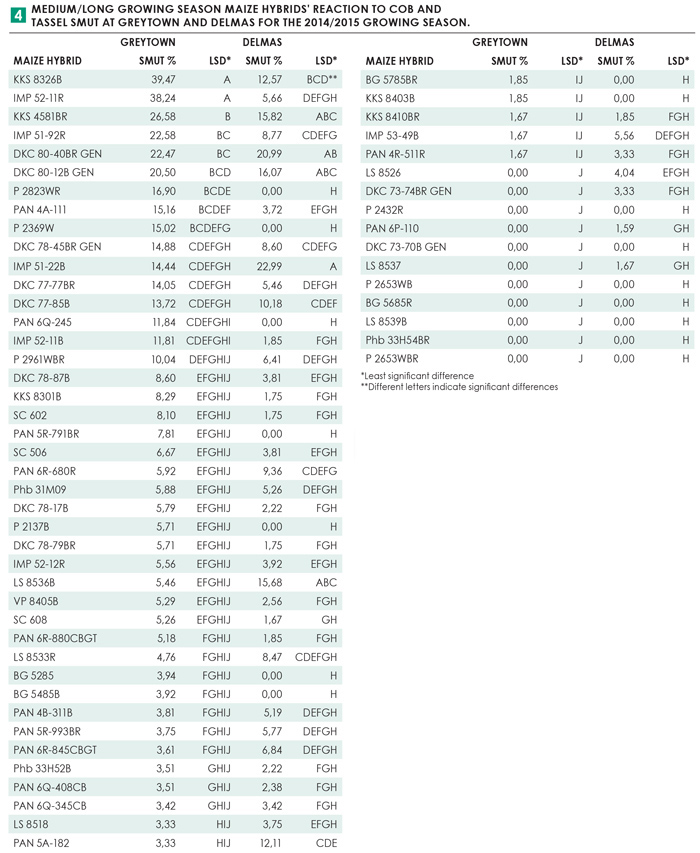