Home EDITORIAL Little has really changed in the last 50 years

Has so much really changed in die last 50 years, I wondered the other day. We are living in an era where the tempo of change is constantly increasing, especially over the past two years. But if we were to look really closely, the story remained the same.

The circumstances are certainly very different, the risks are without a doubt higher – or maybe it is just relative in some ways? The fact remains, if one reads through history – and now I am referring specifically to the yellow SAMPI-SAMSO book that tells the story of maize so thoroughly – the challenges, threats and attacks that grain producers must face today still remain the same and substantially there.

By this I do not at all mean that NAMPO and Grain SA as organisations did not succeed at anything. On the contrary, where would we be today if the grain producers of that era did not have the perseverance to establish it? They were truly men with courage and vision in those days.

In the run-up to the NAMPO Harvest Day, I was as excited as a little boy going on his first hunt. I have been to the Harvest Day many times, but I just knew this year would be different. It was especially the last three weeks just before NAMPO that were surprising in so many ways.

I had to repeatedly remind myself of my own advice to look beyond the noise, but at the same time I have to admit that I was dumbfounded a few times. Why? Because of people, the reactions, the attacks and the words. Sometimes people so close to us! Here I first have to thank you, our Grain SA members and staff, for your support.

The value of this lies in what we could all learn from it. For me it is as clear as daylight that the power of conversations in these times, the value of a team (wider than just the staff) that are available to talk and to spontaneously offer help, air views and support, are something that we in Grain SA have to keep cherishing and apprecia­t­ing. I would just like to thank each of you for this. The uproar over the COVID requirements actually blew over quickly and NAMPO ’22 was a great success for the right reasons. 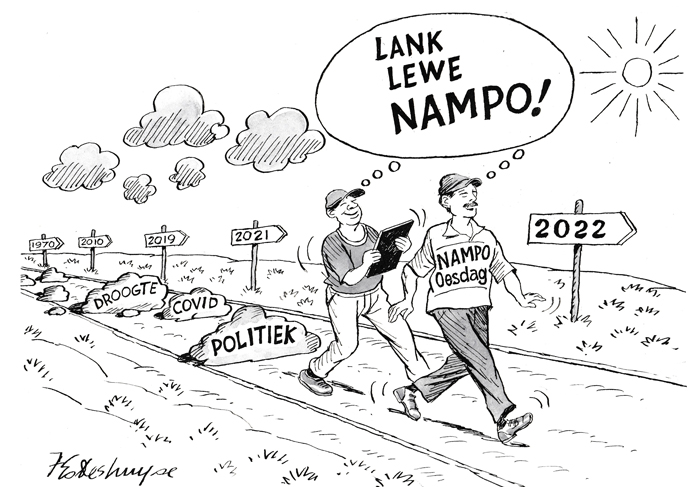 Furthermore, I believe that we will get a favourable outcome regarding the maize regulations. I have to remind myself time and time again that certain things always happen with a reason, but I undertake to use this incident to get certain actions, functions and processes in the larger grain industry back on track.

Several reasons can be given, but the fact that it has today become easier not to talk and reason with each other in person, has had a major impact on outcomes. It is well known that I am pro-technology. Although we really need to keep that which is ‘good’ and ‘effective’ here, it should never be easier to hide behind the voice without a face, because many are braver behind a keyboard than with the spoken word.

I would like to hear from you: Write to me, contact me, make an appointment or invite me to visit you (pieter@grainsa.co.za).

The luxury of ceteris paribus

Geared for the new season