Since the beginning of 2021 international fertiliser prices have been rising steeply. However, for the better part of 2021, the rand has been strong, therefore moderately cushioning the local industry against the total impact of international price increases.

South Africa being a major importer of fertiliser means international availability and price of fertilisers have a direct impact on a producer’s bottom line. International fertiliser prices in August, except for potassium chloride, have hit record highs. The contribution of fertiliser towards production costs is between 30% and 50% – depending on the crop – and therefore significantly impacts profitability.

International price movements
Graph 2 shows the international fertiliser prices in rand terms. Since 2007, except for the spike in 2008/2009, the trend has generally been downward until late 2020, where there is a sharp upward movement. Between 2007 and 2021, international fertiliser prices increased significantly in rand terms: ammonia by 427%, potassium chloride by 327%, DAP by 220% and urea by 197%. In the same period, the rand weakened by about 105%. The extent of increases is determined by the exchange rate.

All international fertiliser raw material prices in dollar terms have increased significantly in the past year, indicated on the left side of Table 1. The exchange rate strengthened by 14,3% from August 2020 to August 2021 – a stronger rand means imports can be brought in relatively cheaper. The right side of Table 1 shows international fertiliser prices in rand terms. International prices of ammonia, urea, DAP and potassium chloride increased by 125,6%, 29,5%, 72,7% and 99,3% respectively during that period.

Table 2 indicates the average fertiliser prices between September 2020 and September 2021; the table further indicates individual price changes for Sasol’s LAN and Foskor’s MAP in the same period, which shows a 50% and 82% increase respectively. The right side of the table shows what has happened to local fertiliser prices over the past month. Both LAN and potassium chloride show increases of 2,2% and 18,9% respectively, while urea and MAP have decreased by 0,9% and 0,3% respectively. Regarding the individual manufacturers, Sasol’s LAN increased by 2% and Foskor’s MAP decreased by 2%. South Africa is currently faced with a shortage of ammonia due to a drop in the supply of natural gas from Mozambique, impacting the whole nitrogen value chain. 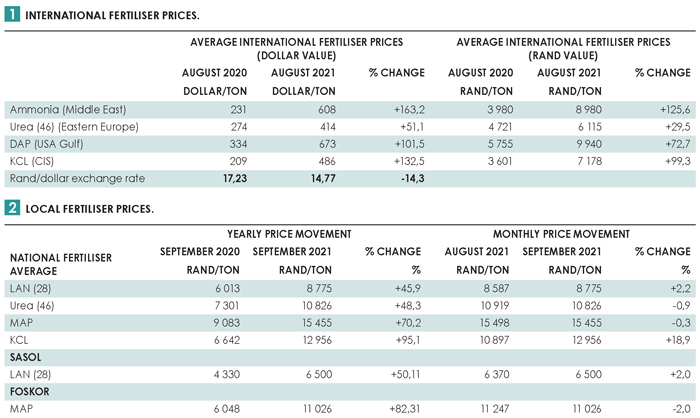 Expectations for the rest of 2021
The above illustrations of increasing international and local prices indicate why the affordability of fertiliser is low. Unfortunately, it does not seem like there is an expected decrease in the near term. As fertiliser makes up so much of a grain and oilseed producer’s variable production costs, this will again put the profitability of grain production under pressure. At this point, a strengthening rand and stable or higher grain prices would help to cushion the industry against diminishing profits.