Home EDITORIAL A plan to get SA through the winter

Winter has arrived. The Cape weather brought rain in time for planting and the frost is busy helping our summer crops to dry off so that it can be harvested.

The multitude of predictions that we would once again almost end up without white maize at the end of the season, did not come true. Yet grain prices remain at healthy levels for such a good harvest – something producers do not experience often.

It is, however, also winter in South Africa. There is a sliver of hope that some of the markets are recovering (like a seed that is germinating beneath the soil), but (and it’s a BIG but) the daily signs of decay in our society are getting worse. Each day there is a new Eskom file telling of the significant theft, corruption and extravagant life of some officials – or should I rather say robbers?

While the politicians are having a go at each other, the country is collapsing and our people’s relationships and feelings are not turning positive. More and more of our young people talk without any patriotism of a future elsewhere. In agriculture we know that once the winter has passed, the spring will arrive – with new growth and new life. But this winter in which South Africa is trapped, may last much longer than we would have liked.

Way below ground and behind the scenes a few people worked hard to establish the principles of growth in a new plan. Yes, another new plan! It is called the agricultural and agro-processing master plan (AAMP). In my 36-year career in the grain industry, I have been involved in writing many plans. The one difference I noticed this time compared with the plans of the past 20 years or so, is the fact that the private sector formed part of the writing and did not just comment on the government’s plan. The second difference is that we are now in the implementation phase – who has to do what by when. The AAMP has to be implemented together. 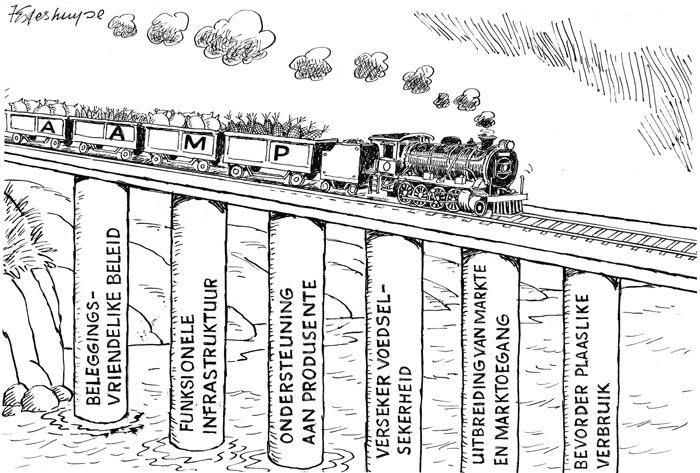 The important pillars on which the plan is based, are:

If we can improve each of these pillars by only 25%, we will already see the difference emerge in the form of yield. However, as producers we never plant for a 25% yield potential – but in this case it is a perennial plant that will need time to reach its full potential. The game, however, needs players on the field, not only coaches on the stand. Grain producers know what makes the difference on the scale at the silo – if you only sat on the porch giving orders or whether in the evening your shoes tell the story of the fertile soil you cultivated and inspected.

For the sake of the young people still calling South Africa home, the private sector must step in and we must get our feet dirty in order to implement the AAMP. History, where we look back after five or ten years and criticise others because the plans have not been implemented, needs to be rewritten. The pillars mentioned above were placed on the table by the private sector. This is where we stand or fall in agriculture. Producers know about falling down, but not about staying down. Grain SA has so far been closely involved during the whole process. We will now also take responsibility to do our part so that the implementation and monitoring can be successful. Our generation owes it to posterity.

Heavy issues are on the table

Positive attitude for way ahead eminent at Congress

A plan to get SA through the winter

Thabang - June 2, 2021
0
Winter has arrived. The Cape weather brought rain in time for planting and the frost is busy helping our summer crops to dry off...