Home EDITORIAL Past the tipping point

During the end of January, I read a few articles and contemplated a number of events in the agricultural sector and society in general. It seems to me as if we have moved past a tipping point with a few things that are not necessarily related to each other. It is not as if it is an exact science, but sometimes one gets such a notable gut feeling.

A chord was struck when I read the comments of Max du Preez and Tim du Plessis on the state of our country with regard to service delivery by the government to its citizens.

Their advice was that we as citizens should seriously start organising to provide certain services ourselves and that we should not wait for the state anymore. Along with this, I also read the outcome of the Koster case, where the court gave the residents permission to provide their own drinking water in view of the municipality’s total inability to do so. On the one hand, I must say that this is not new for agriculture – we are familiar with it.

I thought about how we have been privatising certain services for years. We regularly report to producers on where we stand regarding the ‘privatisation’ of our research and then we have also introduced levies to ensure that the latest seed technology is available to producers. SAGIS has been doing the work of the state for almost 25 years regarding the situation of our strategic stock. Just as the heart of the crop estimates is being done by the private sector. We have been monitoring the quality of imported grain and fertiliser for years. These are all functions appearing on the duty sheet of one or other government department and for which tax money is most probably being budgeted.

I do not even want to start talking about issues such as security and theft. It is disgraceful that the citizens of the country have to pay millions in taxes, and then in any case have to pay for policing and security themselves. So, what exactly is my point? For the first time I started looking at producer organisations as a body fulfilling that role. I also contemplated the role we will have to play in future. When looking at the type of training our staff has undergone in the past five years or more, it already indicates a certain direction. We have focussed on the softer type of skills: conflict management, trauma counselling, self-management (helping others) and negotiation skills. We started to serve the producer as well and not just his business. 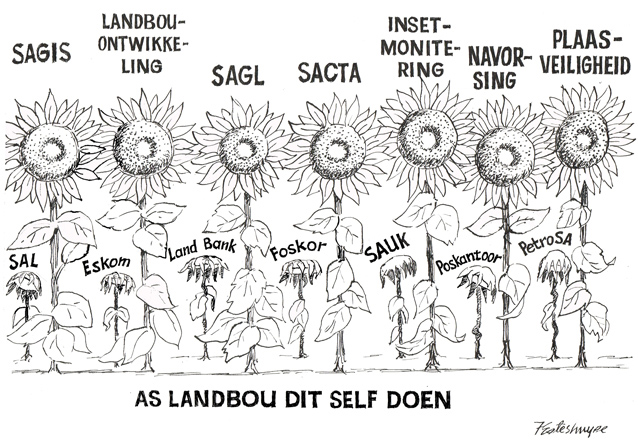 My time at Grain SA is quickly running out and it may be something our leadership will have to think about carefully in future. Our primary focus should always be to ensure the sustainability of the grain producer, but we cannot overlook the fact that a major service provider in the sustainability chain is failing us. What role should organised agriculture play in filling the gap and what should be left to civil rights organisations? When I look at our inputs into the agricultural masterplan, there are many proposals for partnerships where it ultimately amounts to the state seconding its legal duties to the private sector to ensure that food security is maintained.

A very precious Jewish friend of mine – Dr Eugene Brock – always told me: ‘Jannie, first the principle and then the price.’ Before fighting over having to pay double, we need to discuss the principle of doing nothing. Louw Steytler taught me about the downfall of a nation – not because people do bad things, but because good people do nothing.

My last piece of advice is that we should not only focus on the here and now to survive COVID, but that we should analyse the tipping points around us carefully and then start to build the path to the future. The price of doing nothing and only criticising each other, is simply too high.

Advice from the home straight

A plan to get SA through the winter

Heavy issues are on the table

Advice from the home straight

Thabang - July 8, 2021
0
This is the second last editorial I will write for SA Graan/Grain. The plan is still for me to lay down the reins as...