Home EDITORIAL This is who we are!

Who do you think you are?’ were the words our Minister of Police, General Bheki Cele, used to starkly address a farmer recently. I do not know the farmer and I am not aware of the precise circumstances of the situation, but through my job I represent farmers and therefore I took the scornful remark personally.

I thought about it day and night and tried to answer the question over and over in my mind. The night after the Senekal incident I could not sleep. I once again reflected on the general’s words and tried to answer his question. The following, General, is my best attempt:

My name is Jannie, General. We have met a few times when you were the Deputy Minister of Agriculture. Just like you, I also have responsibilities in this country. They might not be as big as yours, but I form a link in the chain that provides food for our people. The part for which I specifically assume responsibility, is grain. That is the pap and bread our people eat and the feed for the animals so that we can braai and enjoy KFC at meetings. Even the cheese on the platters after your fancy three-course dinner, is made from the milk provided by the cattle who consume our grain. 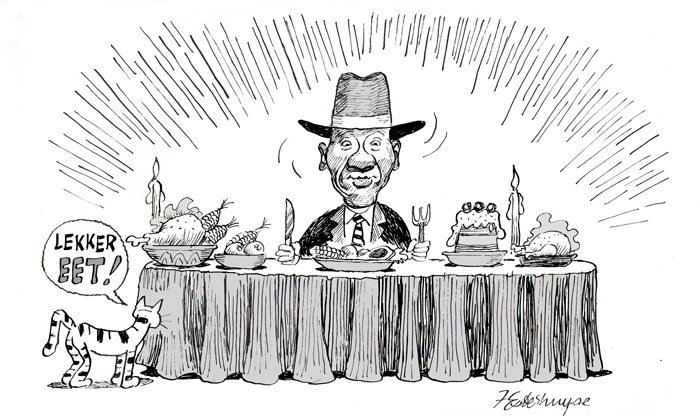 I am not on TV and in the papers every day and in front of the cameras at murder scenes or in the townships among the people – but you see, General, the food that we have produced is there. You will find the same food in the dining halls at the Zondo Commission, who has to listen to all the injustices against our people. You see, General, food is everywhere and we have produced it. This is who we are, not who we think we are.

Our wives, General, are the ones who drive sick farm children to town – even at night. They are the ones who sit outside the school gates, praying for the children … and for the teachers to educate a new generation who will not steal and be corrupt. A next generation who will not kill others and destroy their property. Who will get up at night to help a cow struggling to calve and to calibrate a planter to deliver a better harvest so that there is enough food for our people – for your children as well, General! It is our wives who teach the people on the farms to read and sew in order to restore their human dignity. We teach them about Jesus who forgives their sins and who can give everybody a new life. We pray with them for rain when the sun is burning down on the African continent and scorching the harvest. We sing and dance with them when the rain showers down on the dry maize fields. It is us, General, who dropped off a bale of feed next to the township in winter for the scrawny cattle roaming amongst the garbage, looking for food. We put out fires that other people have lit. This is who we are, General, not who we think we are.

For us working in the office … Well, General, last night and over the weekend we were busy writing business plans and ordering inputs for our black farmers in KwaZulu-Natal and the Eastern Cape so that they can plant maize on their one-hectare fields. It is most probably the only food they will get this year. You see, those women are waiting for our bakkies to appear on the horizon with the inputs, so that they can produce food for themselves. They are not really keeping an eye out for your flashy black car with the blue lights, because they know your words and promises are empty and will not fill their stomachs. We teach them about conservation agriculture and calibration and how to use technology to retain their human dignity. This is who we are, General, not who we think we are.

If you search for my name at SARS, you will see that I have paid my tax every month since January 1985. Also, at the Tshwane municipality you will find that my water and electricity bill is paid up to date, even though they sometimes do not collect my garbage and my streetlight is not working either. I even pay e-toll – though I do not really know why some days. I have no outstanding traffic fines against my name and I have never been in court for an infringement. Maybe that is why you are not entirely sure who I am.

I would have liked to tell you more, General, but I do think that I have tried to answer your scornful question in my simple way. We pray for you, General, for wisdom to do your great and important job, so that we can all be safe to play our role to provide food for you and all our people.