South Africa is still in lockdown (even if it is at level 3). When looking at the photos on the groups, I see many of our producers are locked down in the mud in their fields. ‘Jannie, it’s easy to get into the fields, but getting out is the problem,’ I hear them say.

The gathering of our good harvest in the north will be a challenge. Meanwhile, millers are queuing up to buy WM1 maize. Many of them did not see the rise in demand for maize meal coming. To be honest, it has not really been a pleasant surprise for most of them. They relied on the convenience they have every year of having top quality maize in abundance on their doorstep.

Many of the millers planned so carefully not to have any expensive, old stock left at the end of the season, that they are now quite despondent – and tired of making phone calls trying to find WM1 maize. After many years Zimbab­we has at long last decided to buy GM maize. This was a nice windfall for our producers, but the buyers were caught somewhat off guard. Circumstances change quickly. The harvest looks promising, the frost stayed away, but it’s wet! That said, we would rather struggle towing tractors and harvesters out of the mud, than staring at withered maize plants every day. When the yield monitors are running smoothly, everyone’s mood is lifted. I do, however, understand that problems with grading are occurring again. 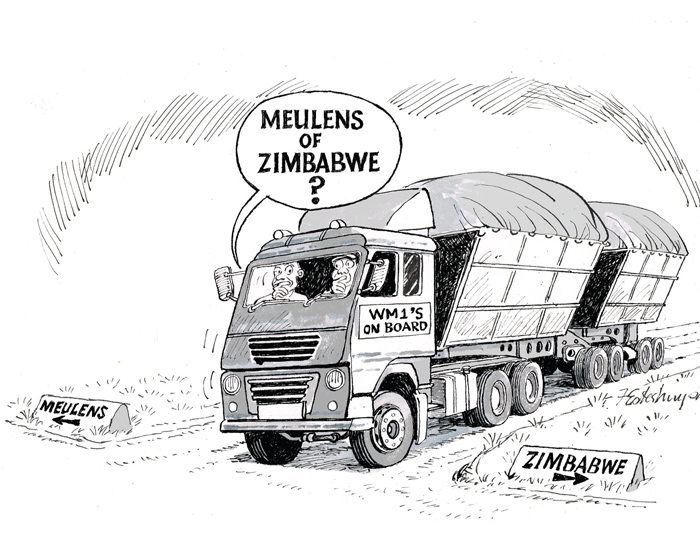 Rain is very scarce in the south – producers are planting in the dust. Although there are good prospects for the end of May, the season is already late. Nothing is just normal. Yet we survive, albeit with difficulty. The inputs for the new season are going to be a challenge as the expected increases send a chill down the spine. How are we going to survive? To look around for support will not be of much help in a country that is full of conflict and discrimination. Having a friendly policy environment for agriculture is probably the same dream as ideal weather for a whole season.

Yet agriculture is showing its mettle and vitality in these trying times. There is enough food in the country and the agriculture machine is running like an old Lister engine in the outbuilding so that we can have light in the house. As we test the seed that we plant for viability, agriculture has been put to the test to show what’s in us. Can we deliver what we always boast about? Yes, we are the best producers, but our Creator has also blessed us richly to have enough in such a difficult year to be able to take care of others.

I would like to trust that our financial institutions will also take this into account when assessing production loans again in the future. Just as a farm is a business that can go under when it is not managed properly, so are banks. The state of our Land Bank indicates that they cannot withstand a drought on their own. So, one state-owned enterprise after the other is calling for help. Yet no one hears when producers call for help. That’s sad.

My last thought is about boasting. I spoke to a very dear friend of mine who is in ministry, and I detected some pain in his voice when I asked how he was doing. ‘After all, we are not essential services,’ was his answer. In agriculture we are really privileged to be able to carry on full steam with our day-to-day tasks in these difficult times in order to remain economically viable, but let us not boast about it as if we
did it by ourselves. Enjoy farming!