I am writing this editorial while sitting in an aeroplane. Across the aisle three young people are seated. One is wearing a coronavirus mask and they order vegetarian sandwiches, not meat. Maybe they are afraid of avian flu or they reckon that they will save the planet by eating less meat. These are not unknown tendencies among our new generation of people.

All three are wearing earphones and their body language indicates that they do not want to have anything to do with the rest of the world around them. I see that one of them are kind of enjoying his beer; wonder if he realises it is made of barley.

Agriculture cannot help but take notice of these consumer patterns, but the question is how much time we have to spend to teach people the obvious things. Is it a question of doing the one and not failing to do the other? The profit motive and sustainability already force each producer to look at his inputs and the planet. After all, every one of us would like to see that our descendants also experience what it feels like to cultivate the earth and provide others with food.

Pressure regarding our production methods and the inputs we use in the process, are increasing. This earphone generation wants to be able to see where everything comes from and how it was produced on the packaging and on their phones. My question, though, is what will restore the balance in the debate. As long as that generation can pay for their food, they will dictate how we have to produce it. However, their expectations have little relation to the cost of production. The cost to produce, store and process GM and non-GM grain separately is becoming unaffordable for ordinary people. I therefore predict that the two streams will become more distinct in the future and that it will be distinguished by price. 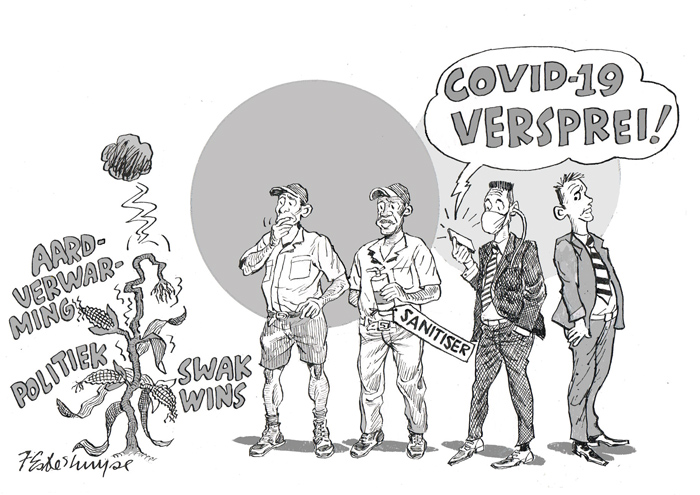 The dilemma faced by producers is that the consumer who can pay, will probably force them to produce the whole harvest in a more expensive way. Then any surpluses must be sold in a market that cannot pay for those expensive processes. The alternative is to focus only on the market segment where price is the most important factor and who – without headphones – has to listen to the cry of hungry children and make plans to feed them. Minimum basic food safety is everyone’s right, but for the rest the consumer will have to pay for his whims and ignorance regarding agricultural production. One can WhatsApp a maize plant all day long, telling him to make his kernels square so that they are better suited for milling, but whether that porridge tree will listen to you, is another matter!

I crossed paths with two groups of world leaders in agriculture during the past week. The leadership of PepsiCo visited South Africa and had a look at their latest acquisition (Pioneer Foods). The company’s annual turnover is R1 trillion! A very impressive amount, considering that the whole of South Africa’s budgeted income is R1,58 trillion. However, what impressed me more, was the global citizenship of these leaders. Their sense of responsibility and ability to rise above the local politics of the country was astonishing. Some still wanted to refer back to the past, when they were stopped dead in their tracks and directed to the future. They skilfully steered the conversation towards the ‘coalition of the willing’ to take the world forward. That was refreshing!

Another world leader from Syngenta who visited South Africa, was at the opening of the 2020 Leadership Academy for Agriculture (previously the Grain Academy). He came to motivate our young leaders to tackle the problems of our time: global warming, geopolitical problems and the worldwide poor profitability of the agricultural sector. It was good for me to know that there are still other people in the world who are looking for solutions with us and not just causing problems.