Home EDITORIAL Plans made together give hope during challenges

March is Congress month. The Grain SA leadership and staff are criss-crossing the country to talk and listen to members at grassroots level. Feedback is given and plans are made together about what we can do to make producers sustainable. Sometimes we socialise until late at night and listen carefully to people’s hearts. We hear about farming problems, and also the pain of the rural areas. Our country and its people are struggling – everywhere!

The interior received good rains and the prospects for a better harvest are definitely there. Even in the southern parts of the Western Cape good rain fell in places, giving every grain producer hope. Grain SA can do little about the weather and the price of grain. Yet I listen with hope to the enthusiasm of researchers talking about work they are doing to try and understand the risks of climate change better and to find solutions to better manage these risks. Just when I started to think that the economy (profitability) and climate posed a greater threat to grain producers than land reform, expropriation without compensation (EWC) reared its head again. A new idea to remove the courts from the process when compensation is discussed cannot ever be right, can it? Every person should have the right to state his case somewhere where independence is the decision-maker. 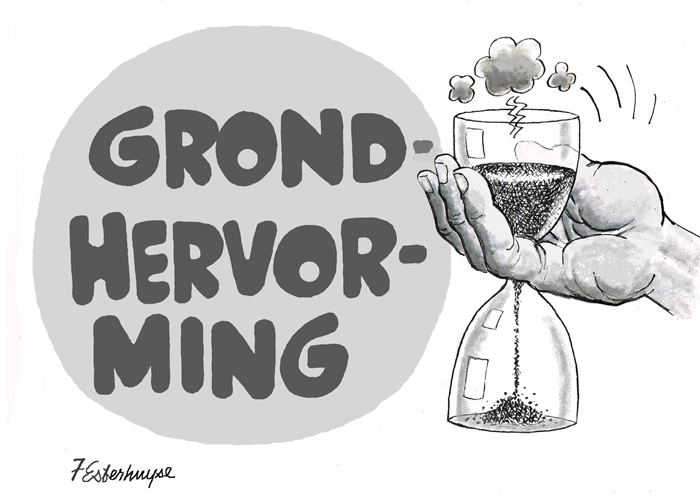 While the process of changing the Constitution can take months and will surely also cost millions, producers have to face the weather and the economy. Our first priority should be to farm sustainably, rather than keep an eye on the political football of expropriation without compensation.

A formidable team of experts is following the EWC process and stating our case. Cooperation with the government to make new plans to allow agriculture (and the economy) to grow, is definitely also reason for renewed hope. Agriculture is well-organised and the leaders are working together to show the government what should receive attention first. New international markets and better biosecurity will help us to produce and export more.

Many years ago, I liked to watch the series The A-Team on television. The end of each episode was basically that the heroes won the day, and the team leader ended with the message that he liked it when a plan came together. Such a plan by Grain SA that I am watching closely is that of obtaining new-technology seed for our producers, to increase competition in the industry and to improve seed prices and service. The first indications are that the end-point royalties strategy has already led to a number of new wheat cultivars and that new seed companies are spreading their wings in South Africa. The seed prices of soybeans have dropped significantly and there are quite a number of new technologies in the pipeline that are exciting to all of us.

I would like to conclude by commending two of our staff members who resigned last month. Jane McPherson and Dr Willie Kotze were at the head of our programme for developing farmers for many years. When I joined Grain SA, they were already here. With diligence, passion and inventiveness they showed the agricultural sector how difficulties can be overcome, and that new farmers can obtain a commercial yield – even on a small piece of land. Jane and Willie, we salute you!