Most people associate learning with formal education at school or a tertiary institution. Although this type of education is important, one should always be open to learning in life. Lifelong learning is about learning for personal and professional development. It also provides us with more and better opportunities to improve our lives. Edward Magwaza (53) has become a lifelong learner. He thought he knew how to farm, but when his path crossed with the experts of the Grain SA team, he realised how little he actually knew.

Knowledge makes you a better farmer
Edward’s farm, Seringboom in the Stoffberg area, has 120 ha of arable land available where he plants maize and sugar beans. He is also planning to plant soybeans in the future if his finances allow it. Currently 70 ha of the land is leased to a neighbouring farmer as his capital is not enough to plant all the land himself. Some of the skills that really made a difference in Edward’s farming enterprise was learning about plant population and the importance of fertiliser as well as skills like how to calibrate a planter and boom sprayer. ‘I used to just plant and spray and had no knowledge about the importance of the right amount of fertiliser or what a difference plant population makes. Now I can work out everything and can clearly see the difference in the field.’

When he joined Grain SA, he was planting only 2 ha of maize. With the help of the Grain SA Beyond Abundance project and the fact that he has been assisted to buy inputs at discount prices for the past three years, Edward could increase it to 5 ha and then to 50 ha last season. Unfortunately, he had tractor problems this season, which depleted a large amount of his available capital. He was therefore only able to plant 8 ha of maize and at the time of the interview he was getting ready to plant 5 ha of sugar beans. He also plans on planting 5 ha of yellow maize next season and dreams of planting more hectares every year until he is utilising all his land. Edward feels farming is a business that one must try and grow every year.

He is very excited to know that he is now no longer just providing food for their household, but producing food for other people in the country. ‘If I can make a difference in just one other person’s life and prevent hunger through my farming, I have achieved my goal.’ 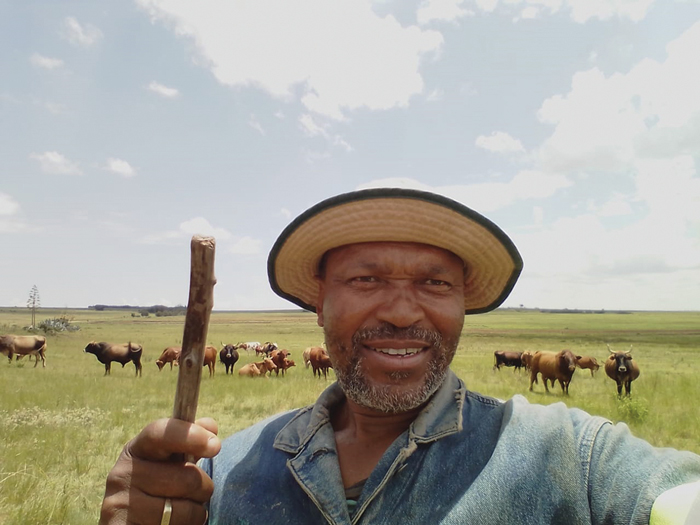 The importance of knowledge
This former store manager grew up on a farm and helped his father who was a farmer. After he finished his school career he started working and later married his wife, Eunice, whose father was a farmer. In 2001 his father-in-law passed away. His mother-in-law then asked him to resign from his job as store manager to take over the farming activities. Edward jumped at this opportunity because he always wanted to follow in his father’s footsteps. ‘I loved the farm growing up and am so happy that I got an opportunity to come back to my roots,’ he says. ‘I just love everything about farming – all the farming activities – from caring for the animals to seeing the plants grow. My dream really came true.’

About three years after he took over his father-in-law’s farm, the Department of Agriculture shared good advice. ‘They told us that if we wanted to succeed, we should find an organisation like Grain SA to help us.’ As Edward didn’t see himself as an inexperienced farmer, he didn’t understand the importance of this advice. ‘I just wasn’t interested and continued doing things the way it had been done for years.’ If he was unsure of something, he would ask the labourers who had been on the farm for years or one of the neighbours. ‘I realise now I actually had very little background and some of the important things were just passing me by.’

When his path crossed with Jerry Mthombothi,­ Grain SA regional development manager in Mpumalanga, he realised why it was important to have an organisation like Grain SA on your side. He eventually joined Grain SA four years ago and soon realised that he actually had very little farming knowledge. He soon discovered the importance of developing as a farmer and the difference that correct agricultural practices can make. He has attended several training courses and is a regular attendee of the Mathabane study group. Through skills development he is now able to perform the daily duties on his farm to a higher standard and understands what farm management is about. ‘Knowledge is power and more valuable than money, because it can never be taken away from you,’ says Edward.

Good advice from a lifelong learner
Edward’s advice to beginner farmers is to work hard and to learn from his mistakes. Here are some of his other suggestions: