Home COLUMNS Mentoring is where the real work gets done

The American financial advisor, Suze Orman, says the key to being a good mentor is to help people become more of who they already are. It seems that the Grain SA Farmer Development Programme is succeeding in doing this through its development coordinators and mentors.

Mentorship is one of the cornerstones of this programme. Jurie Mentz, development coordinator from the Louwsburg office, believes that the mentors who are involved in the various projects of the programme are invaluable and often do much more than most people realise.

Jurie, who has been involved in the programme as development coordinator since 2009, is currently responsible for the Mpumalanga Highveld and the north-eastern parts of KwaZulu-Natal. His vast knowledge of agriculture is a direct result of growing up on a farm near Louwsburg and it is also here where he learned to speak IsiZulu fluently. His father’s farm was isolated and his Zulu friends made sure he not only joined in the games, but could also follow and later join their conversations. 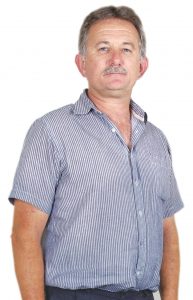 The three C’s of mentorship
According to Michelle Wright, CEO of Cause4 in the United Kingdom, a mentor has three important roles to fulfil. A mentor is:

Jurie believes that the majority of the Grain SA mentors have mastered the three C’s. To him mentoring is about bringing about change in someone by making them think and do differently. ‘I think back to the years when we started. The term “no-till” was seen as something foreign and the use of herbicides was unknown. It is wonderful to see how the implementation of these concepts has restored hope. Suddenly the farmer not only has enough maize for himself and his animals, but can sell a few tons for extra income. Many other positive things like an improved self-esteem and confidence have followed,’ he adds.

‘It is very fulfilling to give of yourself to others. When you see that the knowledge and guidance you share are producing a better outcome, it makes it all worthwhile. Mentors at Grain SA give a lot of themselves in time, patience, knowledge, skills and personal attention. They have to deal with everything from sick animals to vegetables with all kinds of problems. They also need knowledge of tools and tractors so that they can give guidance or help fix that which is in poor condition.’

According to Jurie the best mentors have a personal relationship with their farmers – they laugh together about rain and cry together about drought and losses. ‘To see how a farmer starts to regain hope when he has been used to harvesting less than a ton and then begins to reach his full potential – whether it is 3 t/ha or 8 t/ha – is amazing to witness.’

Stumbling blocks become stepping stones
Almost 2 000 farmers fall under the Louwsburg office – ranging from subsistence farmers to smallholder farmers as well as farmers producing more than a 1 000 t/ha. For the mentors, the size of the mentee’s farm makes no difference – it is all about production and helping them reach their full potential.

As development coordinator he tries to seethe farmers as often as possible – with smaller farmers being addressed at study group meetings and larger scale farmers being visited once a month on their farms.

The main obstacle for farmers in this area is the fact that they cannot own the land they cultivate. Without land ownership, financing isn’t possible. ‘This means it is very difficult to expand or grow their farming operations,’ Jurie explains.

Even though farmers are faced with these challenges, Jurie and his team have seen quite a few emerging farmers who started off on only a few hectares, but have expanded to 12 ha, 30 ha or even 100 ha with an average yield of more than 6 t/ha.

According to Jurie, there are a few things the emerging farmer needs to do to achieve success.

The mentorship programme has given Jurie new hope for this country and its people. He has realised that all farmers, no matter what their background, have the same problems and challenges. ‘There is a positivity in agriculture that should not be underestimated. It can make a big difference in South Africa.’