Home COLUMNS It is about more than agriculture

Graeme Engelbrecht is the development coordinator at the Grain SA Dundee office in KwaZulu-Natal. He supervises and manages the mentors in this area and takes care of all the necessary administrative tasks.

He sees a mentor as someone who is involved in and aware of the day-to-day challenges farmers are facing and not someone who takes over and runs the business or farm. ‘Good practical experience is imperative, as is patience and a heart for agriculture and the people involved in it.’

Two of the 2019 Farmer of the Year winners were from Graeme’s area – Dumisane Hadebe who won the category Smallholder Farmer of the Year and Sabatha Mthethwa who was announced as the Potential Commercial Farmer of the Year. Although Graeme was not directly involved as mentor in their farming operations, he was ‘a brain to pick, an ear to listen and someone who could give a push in the right direction’ – which is the American politician, John Crosby’s definition of a mentor.

Communication and trust are important
Graeme comes from a family history of trading stores and farming in northern Zululand dating back to the late 1800s. After school he studied agricultural management at the University of KwaZulu-Natal in Pietermaritzburg and also completed a national diploma in nature conservation at the Technikon Pretoria, now known as the Tshwane University of Technology.

He began working with Grain SA as a trainer in 2012. Being fluent in isiZulu, he worked wherever this language was the medium of communication in KwaZulu-Natal, Mpumalanga and Gauteng. In 2014 he became a mentor with the ARC/Monsanto project and was appointed as a Grain SA development coordinator in 2015. He currently oversees the whole of KwaZulu-Natal, excluding the southern area and the Zululand district. 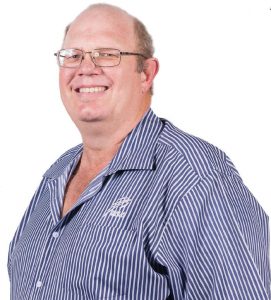 Although Graeme is not directly involved with the mentoring of the subsistence farmers, he services the larger scale farmers with regular visits to support and guide them to improve their farming skills.

To Graeme the Grain SA Farmer Development Programme is not just about advancing agriculture. It is also about uplifting people and improving the lives of those in rural communities. For this reason he believes that honesty, integrity and humanity are vital. ‘A mentor needs to have the trust of the farmer – both personally and as far as his knowledge and capabilities are concerned.’ He says it is also beneficial to be able to communicate in the farmer’s own language and have an understanding of his culture and outlook.

Graeme has witnessed how the farmers’ appreciation for the help, guidance and assistance provided have motivated the mentors involved in the Farmer Development Programme. ‘The scepticism from all sides of the racial divide can make it difficult to convince someone to become involved in the programme as a mentor. I normally urge them to give it a try without obligation. Once the emerging farmers express their appreciation for their willingness and knowledge, the new mentors seldom look back.’

There are many challenges facing mentors, such as initial mistrust by the farmers, the logistics of deep rural areas making access difficult, farmers with poor agricultural knowledge as well as politically inspired perceptions and expectations. These, however, also diminish when appreciation is expressed by the farmers.

Change is part of the programme
The Dundee office has 2 148 registered active farmers and Graeme encourages them to take part in the projects to get the best assistance. Last season there were 659 Beyond Abundance farmers and ten AB InBev-funded farmers under the guidance of this office. Graeme tries to meet on a monthly to six-weekly basis with the study groups or with the individual farmers in the case of larger farming operations.

Apart from the individual visits and study group meetings, specialists often accompany him to meetings and visits to give further guidance. Telephonic support is also provided. The assistance is not limited to those who have entered the projects, but to all who are members and need support.

‘In the beginning farmers lack self-confidence. Stumbling blocks limiting their success include outdated knowledge, finance, theft, cultural traditions and lack of support. There has, however, been substantial progress in the area since the mentorship programme began.’ At meetings and farm visits, farmers who have been getting more mentoring help impart knowledge to the less experienced farmers. ‘The yield potential has gone way up since establishing key agricultural practices like soil nutrition and technical and financial skills,’ says Graeme.

Since being involved in the programme, Graeme has developed patient perseverance. ‘This is something which some of the farmers have to develop too, as they want to go too big too fast. It is important to guide them on how to grow their farming operation, as any dream is realisable – just be patient, persevere and continue working hard.’

His dream for agriculture is that more commercial producers will get involved in the programme and that decisions being made at government level will be for the good of agriculture and the country.