Amidst the challenging circumstances surrounding the Covid-19 lockdown, many families have rediscovered the value of going back to basics. As an unknown source states, ‘Going back to basics is the simplest way to find calm in the chaos.’ Timon Filter and his wife, Margi, made a decision in 2019 to revert back to a simpler way of life and have since embarked on a quest for self-sufficiency.

They currently reside on a small holding of about 30 ha outside of Piet Retief. Here they provide for their daily needs with food produced on their own land and from their own animals. ‘We decided to practise what we preach – you can’t tell people to live off the land and then buy what you need!’

Feeding body and spirit
Timon was raised in a farming community. Although his family was involved in the timber industry, he has a vast knowledge and love for agriculture as he had a lot to do with farming through missionary work.

When he was approached in 2017 by Jurie Mentz, provincial coordinator at Grain SA, to become part of the mentorship programme, his initial reaction was that he was not qualified. ‘When Jurie asked me to mentor two study groups, I was unsure if I was the right person for the job. However, as soon as I heard what Grain SA’s vision was with the mentorship programme – to empower emerging farmers to sustainable self-supporting commercial production – I was on board.’

This vision was in line with Timon’s calling – his ancestors relocated from Germany to bring the gospel to the Zulu nation. He knew that trying to feed people spiritually when they had a physical hunger, would not be effective. ‘We had to find a way to feed people physically and spiritually.’ It was important to help find a way to eat from the land on which they were living. ‘We discovered that maize gardens were the way to go.’ Becoming part of this programme helped develop his passion.

Teamwork necessary to reach goals
Initially Timon worked with 165 farmers, divided into two study groups in the Piet Retief/Pongola region. In his second season as mentor, the farmers were divided into four groups, but due to a lack of finance only 86 of the farmers could continue. ‘Those that continued realised that they had to take responsibility for their own piece of land, otherwise there would be no harvest.’

To Timon the most important quality a mentor needs, apart from knowledge and passion for agriculture, is a passion for people. ‘Without it you won’t succeed and you won’t care whether or not they succeed.’

One of the biggest challenges in his area is the conflict amongst the people which can easily make one despondent. ‘If you are passionate about agriculture and the people, you will learn to look past this and focus on the goal.’ There is an old Swahili proverb that says, ‘A boat doesn’t go forward if everyone is rowing their own way.’ Timon realised that for the programme to succeed, he would have to figure out a way to make them ‘row together’. 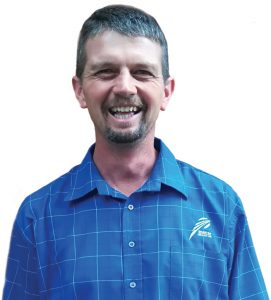 As he believes that cooperation and teamwork make the difference between surviving and thriving, he tried to explain to them that if they worked together, they could share costs. ‘I tried to get the groups to see that if they cooperated, they could buy equipment together to share and become more independent. When you farm on such a small scale, you cannot buy your own tractor and implements.’ In his second season as mentor he already saw a vast improvement in the cooperation amongst the study group members. He is therefore really sad that the Jobs Fund funding had not been granted for the new season, as great strides have already been made in improving cooperation and agricultural skills.

He thoroughly enjoyed the personal visits to see first-hand how the harvest was growing. When there were problems or when disaster struck, he tried to encourage them, but was usually the one inspired. ‘A farmer needs faith, otherwise he will not even put the seed in the ground, but it was amazing to see their resilience and how easily they bounced back from adversity, believing the next season will be better.’

A mentor and trainer in one
Timon’s involvement in the programme was, however, not limited to mentoring as he was also employed as a trainer and has already presented eight different courses.

As a trainer he has to make sure that subsistence farmers realise their potential through the development of their knowledge and skills. ‘The dream is to get them to develop from smallholder farmers into commercial producers.’

Timon now focuses on the training part of Grain SA’s farmer development programme to ensure that skills and knowledge continue to develop. In training, the basics of maize production is covered – the A to Z of how maize grows, and what the best conditions for growth are. ‘It is important that they know how the plant grows and that it needs food and water for optimal growth.’ Aspects like the importance of soil profiles and the nutritional value of the soil are also covered as well as marketing and mechanisation.

‘Through the course “Farming for profit”, farmers have to realise that planting maize should not just be for survival. Even if they farm on 1 ha, it is still a business and worth the hard work.’

Mahatma Gandhi, the Indian political ethicist, said, ‘Everyone wants to be strong and self-sufficient, but few are willing to put in the work necessary to achieve worthy goals.’ Thanks to the Grain SA Farmer Development Programme, farmers are equipped with the necessary skills to work hard to reach their goals and fulfil the dream of living a self-sufficient life.