While in lockdown, South Africans have been bombarded with negative news, while the whole world’s focus is on the rising death toll and the coronavirus devastation. One can easily feel overwhelmed and it is therefore important to look for ‘good news’ stories in these trying times.

On 30 March, Elle magazine shared 38 positive news stories that occurred worldwide amidst the deadly virus. These included a couple who donated the 400 meals from their cancelled wedding reception to hospital staff who were working long hours. Numerous musicians have live-streamed concerts to keep fans entertained and several quarantined sing-alongs and dance-alongs have taken place. In Venice, locals have noticed how clear the water appears, perhaps due to the lack of motorboats and pollution.

Make the most of opportunities
Wayne Dyer, an American self-help author, said if you change the way you look at things, the things you look at will change. This is what Lauwrens Potgieter did when the pressure of land claims led him to his decision to stop farming. ‘I did not want to sit around and brood, but decided to keep busy by helping others and trying to make a difference through sharing my knowledge,’ this former Jobs Funds mentor says.

Lauwrens, who farmed with maize, soybeans and cattle in the Carolina area in Mpumalanga for 40 years, was involved in the Grain SA Mentorship Programme for two seasons. After hearing about the programme, he realised that his knowledge and farming experience could be useful in the area.

He admits the biggest challenge at the onset of his involvement was to ‘think small’. ‘I had become so used to planting on a large scale, that it was almost intimidating to start thinking in terms of a single hectare.’ However, he went back to the basics to make sure he could help these farmers succeed. ‘I hope after mastering their single hectare and improving their yield, some of them will be able to expand their operations.’

Another challenge Lauwrens faced was when he realised that his limited knowledge of the Zulu language could hamper the study sessions in some of the more remote areas he had to visit. Because he was so committed to the programme, he employed the services of an interpreter, whom he paid out of his own pocket. ‘In this way I ensured that everyone would understand what had to be done.’

Showing the way
To Lauwrens, experience, good people skills and patience are three of the key qualities necessary to be a mentor. ‘Being a mentor will teach you patience very quickly if you do not have it,’ he adds. He says it is very important to make time to visit the farmers as often as possible to give some individual attention to their farming operations. ‘I could see that it made them feel important when I popped in to see if what we had discussed in the study groups was being applied.’ 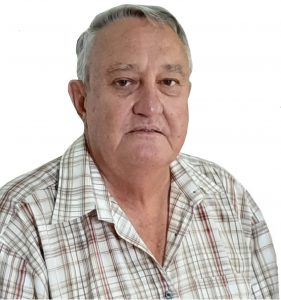 The 160 farmers under his mentorship were divided into four study groups, spread over a distance of 400 km. Although there was a lot of interest in especially maize production, limited knowledge of correct agricultural practices had hampered good yields.

In this area many of the farmers did not want to apply herbicides, as it would kill the morogo or pumpkin which had been planted between the maize. Others would try to save fertiliser for a next season by not applying it all. This is where the theoretical side of the programme was very useful, as farmers would discuss their successes and failures and inspire each other to apply the correct agricultural practices.

One of the farmers who benefited from his expertise in these groups, was the 2019 Grain SA/Absa/John Deere Financial Subsistence Farmer of the Year, Mazonya Dhlamini. ‘I am very proud of this humble, quiet farmer. There are so many people who ask lots of questions and then don’t follow the advice we share, but Mazonya went home after the study sessions and applied the knowledge he gained. During personal visits, I could see that he took pride in what he was doing.’

Sharing builds relationships
As with so many of the mentors, Lauwrens also realised that no matter the size of their land, farmers face the same problems. In the areas he supervised, some would receive sufficient rain and could realise a good yield, while others battled to make ends meet as a result of the drought. Marketing was another stumbling block these farmers had to deal with.

He says one of the aspects that made a huge impact in his own life, was the farmers’ rock-solid faith. Meetings were always opened with prayer and when they prayed for rain, they always believed it would come. The positive interaction between family members, all working together towards a common goal, also impressed him. ‘I really miss mentoring the farmers,’ Lauwrens shares.

There is a Welsh proverb saying that ‘bad news goes about in clogs; good news in stockinged feet’. Perhaps it is time to share good news stories ‘in clogs’. There are many success stories worth sharing as a result of Grain SA’s Farmer Development Programme and because of mentors like Lauwrens Potgieter. Although he is honest about the impact that problems in South Africa has on the older generation, his hope in the country has been restored by what he witnessed as a mentor.