According to the World Health Organisation (WHO), more than 260 million people in sub-Saharan Africa (SSA) are undernourished. This represents 21% of the population in this region. There is also a rising incidence of non-communicable diseases as diets shift with incomes and urbanisation.

In 2019 the total consumption of grains in SSA was 140 million metric tons. According to the Food and Agriculture Organization of the United Nations (FAO), maize, rice, wheat, and sorghum equate to 89% of total grains consumed. These grains contribute to about 45% of average daily caloric intake in SSA. Since these grains have generally low levels of protein, general diets in the SSA region usually lack sufficient proteins as macronutrients.

Nutritional value of grains
Table 1 gives typical nutritional values of raw grains per 100 g. Nutrients are compounds in food that are essential to life and health. They provide energy, the building blocks for repair and growth as well as substances necessary to regulate the chemical processes in the human body. Chickpeas and soy are better sources of protein. Multigrain products that use two or more grains therefore provide more nutritionally balanced foods. 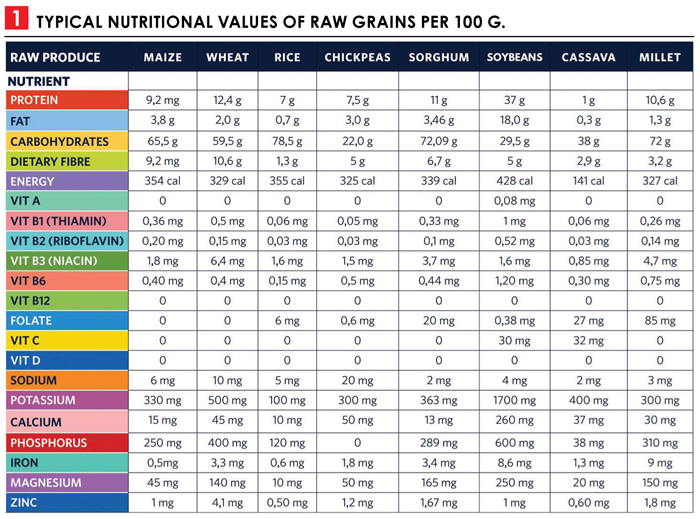 Micronutrients, which include vitamins and minerals, can be added through fortification. Most countries therefore introduced regulations that make fortification of raw meal and flours mandatory. However, it is important to note that cooking of the meal or flour destroys most vitamins from grains and pulses. Traditional starch-based meals in the region, such as pap, ugali, chapati, etc. therefore lack sufficient levels of vitamins after being cooked.

According to the WHO, micronutrient­ malnutrition affects millions of people in Africa. Micronutrient malnutrition accounts for 7% of the global burden of diseases. Iron and vitamin A deficiencies contribute to 1,5 million deaths per year.

It is becoming generally accepted that good nutrition leads to optimal brain development, great health and ultimately thriving communities. The provision of adequate nutrition is therefore seen as central in uplifting local and regional communities and to develop their ability to uplift themselves.

Figure 3 shows the different food extrusion resources of Africa. It includes the following:

COVID also had a severe negative impact on the local economies of Africa and SSA. It disrupted the food supply chains and forced millions of people and children into poverty that caused hunger, malnutrition, job losses and hardship.

New opportunities emerge
As signs are here that the end of the pandemic is moving closer, opportunities are starting to emerge for the SSA region and Africa. Africa has fertile agricultural land, water, and sufficient sun to rebuild itself post COVID-19. To succeed regional and local economic activities need to be created and established to create sustainable local supply of safe food, energy, and water.

The opportunity therefore exists to build strong value chains from the farm gate to the end consumer that supply safe affordable nutritious foods made from locally produced agricultural products.

Humans cannot eat raw grains and pulses. It therefore must be cooked, either in a processing facility or at home before it is consumed. Extrusion has become a popular technology for processing and cooking of grains and pulses. It is a continuous high pressure and high temperature cooking process that is used to produce ready-to-eat products, such as instant porridges, breakfast cereals, puffed snacks, pet foods and aqua feeds. The latest developments focussed on meat analogues from plant-based proteins.

Extrusion plants are central to the establishment of complete value chains between the farm gate and the end consumer. These plants form the heart of the value chain and perform functions that cannot be done by humans. Extrusion is therefore a technology that – contrary to general belief – creates jobs and does not take them away! The establishment of strong value chains also creates a market for local producers, thus strengthening the local economy.

Benefits of using extrusion to cook grains and pulses include the following:

Figure 1 shows samples of extruded products. All products have been produced on the same machine that were reconfigured for the different products.

CFAM Technologies is a South African company that was established in 2007 with the aim to commercialise twin-screw extruders for Africa and the developing world. It is a spin-off company of the North-West University (NWU) and the only manufacturer of twin-screw food extruders in Africa and the Southern Hemisphere.

Building the local economy
When a community is dependent on imported produce and products, money bleeds out of the community, resulting in an unstable economy. By creating a circular economy, money flows between different sectors. By exporting products, money flows into the circular economy, thus strengthening the local economy.

The production capacities of small and medium-sized commercially viable extrusion plants typically vary from 300 kg per hour upwards to 6 tons to 10 tons per hour. Larger plants have capacities of up to 25 tons per hour and more. Small and medium-sized extrusion plants are ideally suited for regional plants that assist with local economic development.

An extrusion plant creates a market for the local farmers’ agricultural produce and forms the heart of the value chain between the farmer and the end consumers. The cost for complete small extrusion plants starts around R6 million. Mid-sized extrusion plants cost between R15 million to R20 million with medium-sized plants around R30 million.