A pesticide molecule is hardly ever dispensed as a pure compound. It is mostly formulated with other substances such as solvents, stabilisers, spreaders and emulsifiers to take the molecule to the required point of activity, but it is the molecule itself that does the job.

Each molecule (and there are more than 10 million organic molecules known to science) is totally unique in its properties and environmental fate. Scientists cash in on that uniqueness of each molecule to perform certain functions.

Solubility and bioaccumulation
For the sake of explanation, a couple of well-known molecules will be used to explain how the physical chemistry of molecules determine their performance and environmental fate. Any molecule of whichever chemical group is soluble in every solvent – the solubility ranges from a few micrograms per litre to a few hundred grams per litre of solvents.

Since water is the principal carrier medium for pesticide spray mixtures and the ‘liquid of life’, focus will be placed on the water solubility of pesticides. Along with that goes something called water-octanol partition coefficient or Kow, which is a parameter used to categorise a molecule in terms of its potential to bioaccumulate in the environment. The fact that a molecule is highly soluble in water does not mean it will automatically leach easily, because other factors such as soil adsorption also play a very important role in the molecule’s environmental fate.

Glyphosate for example, has a water solubility of 10,5 g/ℓ, while deltamethrin is only soluble in water at less than 0,2 μg/ℓ. 2,4-D is soluble at 20 g/ℓ water at neutral pH and much higher at 34 g/ℓ at pH 9. So even the acidity or alkalinity of the water has an influence on the molecule’s water solubility.

Chlorpyrifos is only soluble in water at 1,5 mg/ℓ. Most of these organic molecules (organic means molecules built on a carbon skeleton with hydrogen, oxygen, sulphur and other elements like chlorine) have much higher solubility in organic solvents such as alcohols and chlorinated alkanes like chloroform. Chlorpyrifos, for example, is soluble in 6 300 g/ℓ methanol.

The main issue for agriculture, however, still lies in water solubility, because pesticides are applied to crops or soils from where it may leach if it is highly soluble in water. The Kow has to be taken into consideration: the higher the octanol solubility of the molecule compared to its water solubility, the better the chances of it bioaccumulating in plants and animals.

Organochlorine molecules like the old DDT and dieldrin have a very low water solubility and a very high octanol solubility. This means the molecules are lipid (fat) soluble, making their bioaccumulation potential very high.

The water solubility of pesticides is sometimes regarded as a reason for their presence in the aquasphere (any water body), but other factors may prevent some molecules from entering the aquasphere. Those factors are discussed below. 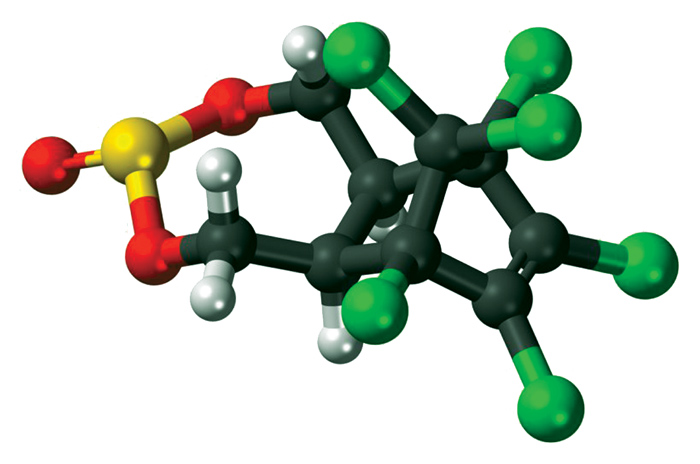 Soil adsorption, soil mobility and leachability
Molecules can be classified as highly polar, medium polar or of low polarity and the polarity relates to their molecular structures. Polarity plays a very important role in how molecules behave in the lithosphere (the soils and rocks, meaning the solid geomorphology of the earth’s surface). Soil structure and minerals also play a significant role in how molecules behave in soil.

Soils are broadly categorised into sandy soils, loam, and clay soils – with each of these having different minerals and structure. Sandy soils contain a high percentage of silica, which does not have a high affinity for adsorbing polar molecules. (The term adsorption means the physical process in which a molecule binds onto the surface of a particle. It is vastly different from absorption, which is the ability of soil to ‘soak up’ substances such as water.)

Clay particles, consisting of clay minerals like kaolin and montmorillonite, have a very high affinity to adsorb polar molecules. That is why soil applied pre-emergence herbicides indicate different dosage rates for different clay percentages in soil. The herbicide is applied to the soil and adsorbed on the surfaces of clay particles, which inactivates the herbicides by binding them virtually irreversibly to their surfaces.

Those molecules may still sit there, but are not biologically available to control weeds. Molecules such as paraquat dichloride and glyphosate, that reach soil while being sprayed as contact herbicides onto weeds, suffer the same fate. On top of that, they are not absorbed by the roots of weeds. Over time these clay-adsorbed molecules are decomposed by solar radiation, high temperature and soil-borne microbes, but the time frame may be decades.

Does this pose any risk to plants? Not really, especially for contact herbicides such as paraquat dichloride, glyphosate and glufosinate ammonium, because they are not root absorbed. However, others such as acetochlor and 2,4-D are slowly released from clay particles while also being slowly decomposed as explained for the others.

Molecules that are very strongly adsorbed by soil clay particles have a low leachability due to their low soil mobility. On the other hand, there are molecules such as the organochlorines that leach easily, because they are not bound by clay particles in the soil. They can, however, remain in the soil for many years because their water solubility is very low and they do not leach out easily.

Loam soils are less prone to pesticide binding, while sandy soils are like sieves, with water filtering through and disappearing into other zones. Sandy soils also normally have little biological activity to aid the decomposition of pesticide residues. Their production potential is also limited by their inability to retain nutrients, unless vast quantities of organic matter are worked into the soil. A little bit of clay in sandy soils is beneficial, because it retains moisture and helps to bind soil-applied pesticides so that they are not leached out by normal precipitation.

Soils may have a ‘pesticide memory’
It is highly likely that most crop fields – and even veld and grazing areas – have a pesticide memory. That memory is the residues of pesticides that were applied any time from 50 years ago to the present. As time goes by, the soil slowly­ releases the pesticide residues. The Karoo region has a gamma-BHC memory from the massive quantities of this persistent organic pollutant pesticide that was dispensed by the state over four decades to control the brown locust.

A scientist who understands pesticide behaviour and environmental fate can easily determine how long ago the pesticide was applied to the area which is sampled for analysis. Some of the cash crop fields have memories of neonicotinoids and fungicides that are used as seed dressings because of the year-on-year planting of the same crop with the same seed dressings. It is even likely that most soils have a glyphosate memory due to the general use of this herbicide.

The question is whether the pesticide memory poses any health risk to people and the environment. That is a debate for another day. However, producers must remember to use all pesticides according to the label instructions – not only for human health and environmental safety, but also for the sake of their own crop safety.

Thabang - May 3, 2022
0
An outbreak of bacterial leaf streak (BLS) in the Piet Retief and Amersfoort areas was reported during the 2020/2021 maize growing season and again...

NBTs should be allowed to pave way for better food security