‘You do not stand alone against con­fiscation,’ wrote an international alliance of 33 civil society groups from 28 countries in an open letter to the people of South Africa, declaring their solidarity with them against the South African government’s plan to amend section 25 of the country’s Constitution to allow for the confiscation of private property without compensation.

In February 2018, South Africa’s Parliament committed itself to adopting an amendment to section 25 of the Constitution to allow government to ‘expropriate’ property without the necessary requirement to pay compensation. By June 2021, this process to amend the Constitution had reached an advanced stage, with an ordinary piece of legislation, the Expropriation Bill, already prepared for the technical implementation of confiscation.

‘We thank the PRA and every one of the signatories to the letter for their solidarity with the people of South Africa, who by now have exhausted all avenues for reasonable discourse with government to get it to abandon this ill-fated policy,’ said Chris Hattingh, deputy director of the Free Market Foundation (FMF), the PRA’s partner in South Africa. 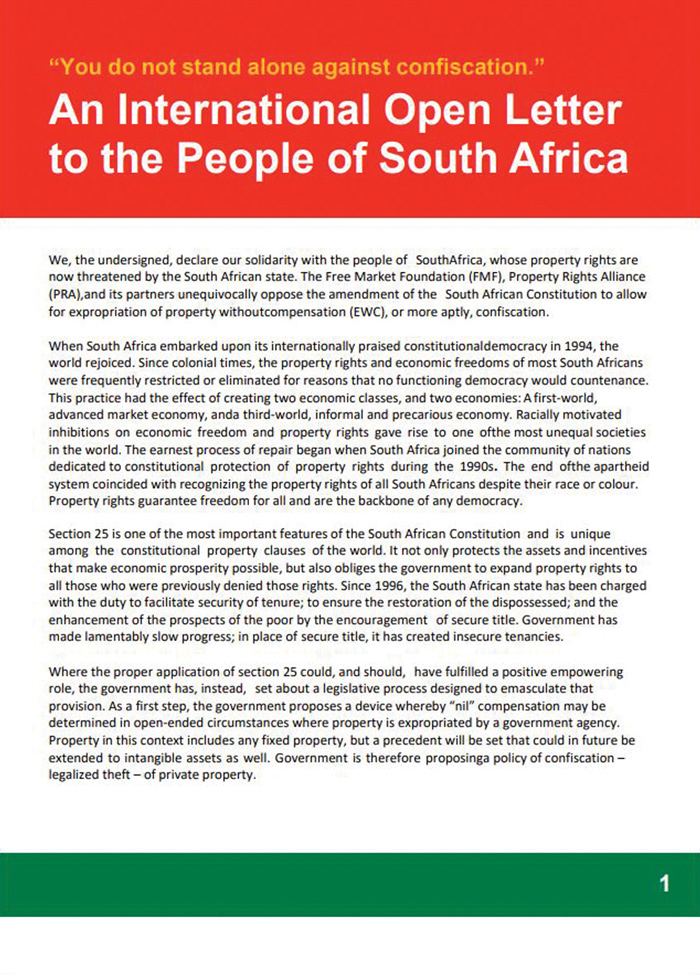 The letter recounts the denial of property rights during the colonial and apartheid eras in South Africa’s history, and how the adoption of section 25 of the Constitution marked a positive, radical departure from this legacy. Government is required by section 25 to not only respect property rights, but also to promote and expand property rights to those who were denied it. Amending the provision to do away with the internationally accepted principle of compensation upon expropriation, weakens the right to property unacceptably and harkens back to an apartheid mindset.

Amending section 25 will dilute the property rights of all citizens and will not solve the country’s current land reform challenges. ‘The government programme seeks to appeal to populism to mask the failure of the government to release state land for personal and commercial use,’ notes the letter.

‘The people of South Africa should be supported not only by sympathetic organisations around the world, but also by the international community of nations. The world rejected authoritarianism in South Africa in the last century – and must do so again,’ said the PRA’s Montanari.

‘We stand with the people of South Africa in this uncertain and trying time when constitutional legitimacy and the rule of law are threatened. Whether or not the government succeeds in its plans to amend the South African Constitution, our common effort to secure universal recognition and respect for property rights will not abate,’ the letter concludes.

The National Assembly has extended to 31 August the deadline for the ad hoc committee that’s working on the amendment to section 25 of the Constitution to allow expropriation without compensation. In this video released late June, Annalize Crosby, head of land affairs at Agri SA, talks about the latest developments.

Sclerotinia research: then and now

Thabang - August 31, 2021
0
The recent unprecedented unrest which swept from the two main cities in KwaZulu-Natal (KZN), Durban and Pietermaritzburg, through to rural towns and communities across...

Sclerotinia research: then and now