The past year has been characterised by exceptional volatility. The COVID-19 pandemic and measures implemented to curb its spread, resulted in the largest economic contraction in South Africa since 1946.

When the pandemic first started, investor confidence declined and emerging market currencies depreciated sharply. In South Africa, this was exacerbated by consecutive downgrades to the sovereign credit rating and the rand reached a low of R19,35 to the dollar in April 2020. Globally, the constrained economic activity, especially in mining and manufacturing output, the grounding of commercial airliners and the ongoing price war between major oil-producing countries caused the largest oil price crash in decades.

More recently, as vaccines continue to roll out and the global economic recovery gathers momentum, oil prices have increased and the rand has strengthened to below R14,50. Along with increasingly dynamic agricultural commodity markets globally, these factors will affect local agricultural markets. This article considers such impacts, with specific focus on the upcoming winter crop season.

Global markets
Globally, agricultural commodity prices have increased sharply. The Food Price Index of the Food and Agriculture Organisation (FAO), which is indicative of underlying agricultural commodity prices, increased steadily since June 2020, but then accelerated rapidly in recent months. By March 2021, it had increased almost 25% relative to March 2020, mainly driven by vegetable oil prices (+86% year on year), sugar (+30% year on year), cereals (+26% year on year) and dairy products (+16% year on year). These price increases resulted from various demand and supply dynamics, which combined to form somewhat of a perfect storm.

Import demand from China has been particularly strong, for both maize and soybeans. This is predominantly due to the rapid rebuilding of its pig herd, which was reduced by roughly 30% in 2019 by the outbreak of African swine fever. When pork supply was under pressure, poultry production expanded quickly, further raising the demand for maize as feed at a time when China’s maize crop was disappointing.

Strong import demand has sharply reduced maize stocks in the United States, heightening the price effects of concerns around the coming South American crop due to dry weather. Other important supply-side factors include reduced palm oil production, exacerbated by labour shortages in Malaysia that were caused by COVID-19-related travel constraints. Sunflower seed harvests in the Black Sea region were also below average, due to weather related challenges, while persistent drier weather in South America raised concerns about soybean supply.

Further to relative prices, planting decisions have also been influenced by domestic lockdown restrictions that periodically prohibited the sale of alcoholic beverages, thereby reducing the demand for malting barley. This follows a period of growing production and increased stock levels in the barley industry. To compound the situation, exceptional yields provided a record barley crop in 2020 and combined with weather-related quality issues resulted in more volumes being diverted to animal feed.

Graph 1 indicates that since the beginning of 2020, more barley volumes have entered the animal feed market (green bars). Over the period from January 2017 to December 2019, monthly feed use as a percentage of total use has averaged at 5%. This has increased to 23% over the period from January to December 2020 and reached a high of 42% in March 2021. The graph also shows that monthly ending stocks have increased since September 2020. A lower anticipated malting barley demand for the beer market and remaining higher stocks will result in decreased barley mandates for the 2021 season. Consequently, the area under production should decrease and a shift to alternative crops are likely, especially in the dryland Western Cape producing regions.

Table 1 provides a comparison between winter crop area and production over the past four years and provides the latest projections of the Bureau for Food and Agricultural Policy (BFAP) for the upcoming wheat, barley and canola season in 2021. The likely reduction in contracted barley volumes creates a scenario­ where area under barley production in the Western Cape can decrease by 49 000 ha relative to 2020, with production declining by 255 000 tons. This decline in area will most likely be substituted with wheat, canola and alternative crops such as oats, lupines and pastures. 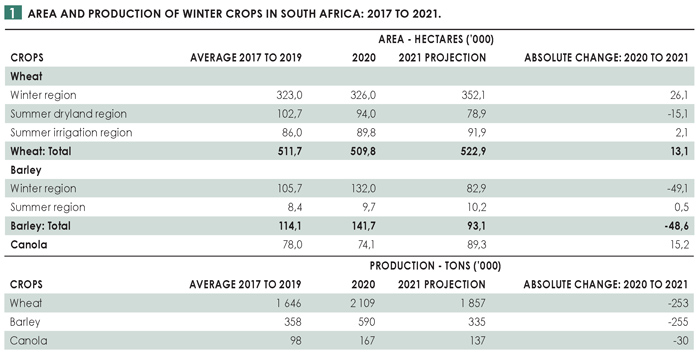 Given favourable wheat prices, the likely retraction in barley mandates and the risk associated with lower prices for feed-grade barley, the South African wheat area is projected to increase by 13 100 ha, largely due to expansion in the Western Cape and despite a further decrease in the summer producing region. The area under canola production is projected to increase by 15 200 ha, underpinned by robust yield performance in 2020 and price support from vegetable oil markets.

Graph 2 presents the projected gross margins for dryland winter crop production in the Western Cape. The gross margin figures represent a weighted average for the Swartland and Southern Cape producing regions. The gross margins are computed by multiplying the region’s targeted yield (which is based on agro-ecological potential) with a farm gate price (Safex or derived price minus deductions including grade and transport differentials) minus direct expenditure. It is important to note that overhead costs such as production finance interest, depreciation, administration, land rent and owner remuneration are not included in the calculations.

With an increasing share of barley downgraded to feed grade in 2019 and 2020, at a much reduced price, a sensitivity analysis was added that shows the implication of various feed-grade scenarios on the gross margin for barley. The sensitivity analysis assumes that between 20% and 40% of the harvested crop are sold at feed-grade prices, which are estimated at roughly 75% of the yellow maize price.

Looking ahead
The baseline projection for the 2021 season shows that barley can perform well under the strict assumption that only malting grade is produced and in fact sold as malting barley. However, in the 40% feed-grade scenario, barley will dip below the gross margins of wheat, canola and oats. In the event that a 40% feed-grade scenario materialises, a producer producing barley in the Overberg region will need to increase his/her yield by 500 kg/ha to 700 kg/ha to match the wheat gross margin. To illustrate the impact at industry level, a 40% feed-grade assumption for all barley produced in the dryland and irrigated regions in South Africa could imply a reduction of R434 million in the gross production value (opportunity cost of selling feed-grade instead of malting-grade barley).