The Rapid Loss Appraisal Tool (RLAT) for agribusiness value chains has been recognised by stakeholders and users as a promising tool to detect losses along the maize value chain in a quick, participative and transparent way.

It goes beyond quantitative or qualitative losses during pre- and postharvest as it also uncovers inefficiencies in the value chain as a whole. RLAT was piloted with the support of the German Development Cooperation through the GIZ Sector Project ‘Sustainable Agriculture’ (NAREN) and the Southern African Development Community (SADC) Adaptation to Climate Change in Rural Areas in Southern Africa (ACCRA).

Both projects were financed by the German Federal Ministry for Economic Cooperation and Development (BMZ). The development and first implementation of RLAT focussed on maize and was tested and adapted for different socio-economic and agricultural patterns in South Africa by the ARC-Grain Crops during the 2018/2019 season in the Eastern Cape smallholder maize production sector. Its main objective was to identify critical loss points in smallholder agricultural value chains by using a quick and participatory methodology.

Research methodology
The target farmers for the RLAT were smallholder farmers (Photos 1 and 2) in the Mbizana and Umzimvubu local municipalities in the Eastern Cape. Instruments used during the field exercise were focus group discussions with the farmer groups, transect walks, key informant interviews, mycotoxin risk assessments and biophysical measurements of the maize grain. See the process steps in Figure 1.

Smallholder farming in the Eastern Cape
Smallholder maize production occurs in gardens within a homestead or on communal lands in the Eastern Cape. The gardens are significantly smaller than one hectare and harvest from these gardens is intended for home consumption. Individual fields in communal lands provided by the traditional authorities are much bigger (two hectares and more) and they can exceed 50 ha when managed by a group of farmers.

External support
The study found that field preparation including ploughing, planting and the application of fertiliser and agrochemicals were carried out by external contractors and paid for by the Department of Agriculture or Grain SA (50% support). From harvest onwards, farmers did not get any significant support and were fully responsible for the value chain functions of harvest, transport, drying, threshing and storage. Access to formal markets was very limited and most farmers sold their produce to neighbours who paid better prices than on the formal market.

Grain quality
The study found that there was only little knowledge about grain quality since farmers mostly do not supply the formal market. However, the length of the cobs, the kernel size, presence of insect-damaged grain and mouldy cobs were well known and grain sorting was practised to separate the visibly mouldy or damaged grain from the non-damaged grain. Good grain was used for human consumption and for local trading, whereas mouldy grain was used for animal feed (pigs, poultry) or for brewing traditional beer (umqombothi).

Storage
It was found that storage was done at the individual farm level with no communal storage facilities available. The simplest and most common way to store grain were 50 kg polypropylene woven bags. However, locally fabricated metal containers (Photo 3) with a capacity of 60 to 100 polypropylene woven bags (3 to 5 tons) were also common. The most common way to store and dry maize cobs was the traditional inqolobane (Photo 4). This mud/twig construction is not airtight (hermetic) and often exposes the stored maize to biotic and abiotic damage such as rain, moisture, insects and pathogens.

Where do losses occur?
The most critical loss points in the local maize value chains were at field preparation (ploughing) and planting due to the unavailability of contractors to do the work at the required time. This leads to delayed planting of up to two months and its corresponding effects on yield. Most farmers indicated that they incurred significant yield losses due to late planting, which in certain cases can be up to 70%.

Storage was another critical loss point because of inappropriate storage infrastructure (woven polypropylene bags (Photo 5), metal tanks that easily corroded) and because of the length of the storage period, which can take up to twelve months. Important storage pests observed were weevils (Sitophilus zeamais) (Photo 6), rats (Rattus spp.) and termites (Macrotermitinae subfamily). Storage losses were as high as 30%.

Farmers harvested grain early to avoid cattle invasion, as the maize fields are not fenced and because of the importance of maize residues as a feed source during winter. This resulted in storing grain with high moisture levels (above 18%) which is not recommended for storage. Coupled with increased exposure to late-season rains due to inappropriate sheltered drying facilities, a high incidence of mouldy cobs (Photos 7 and 8) and grains occurred. These mouldy cobs often increase the risk of contamination with high levels of mycotoxins. Moreover, the widespread use of mouldy grain for livestock feed or beer brewing can increase mycotoxin exposure to humans through the consumption of aflatoxin-contaminated milk from livestock as well as umqombothi.

Solving the problem
Field preparation and support
Solutions to the inefficiencies in the maize value chain were discussed. Farmers suggested that a more diversified access to field preparation services would overcome service delivery bottlenecks. Furthermore, there seems to be a need to build the capacity of farmers regarding good agricultural practices, economic decisions, improved storage facilities and to improve market access.

The Rural Economic Development Hub (RED Hub) in Mbizana, piloted by the ECRDA (Photos 9, 10 and 11), is a promising concept to increase agro-processing (Photo 12) and market access for farmer cooperatives. The access of non-affiliated farmer cooperatives to the RED Hub could increase its economic impact to the region. 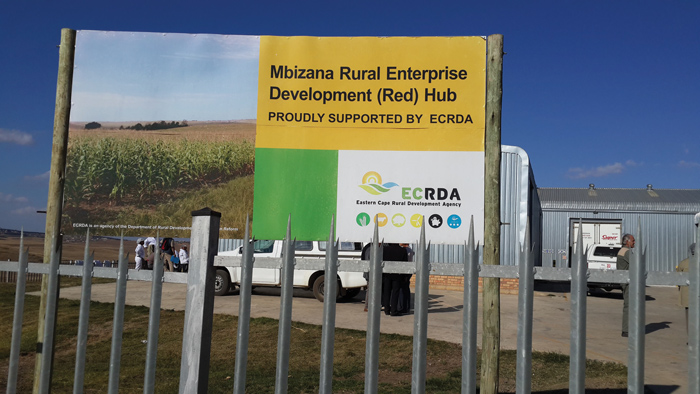 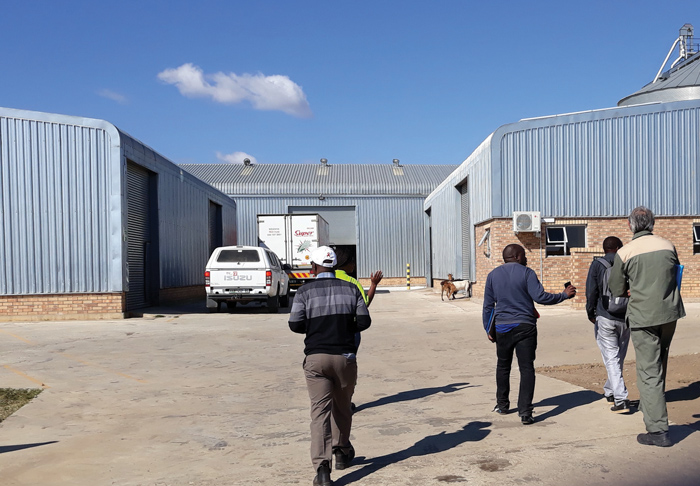 Storage
To mitigate storage losses due to insect pests, some farmers used plastic bins (200 kg) with sealable lids that provided a hermetic storage environment to store their grain (Photo 13). Hermetic storage provides an airtight environment that does not emit any attractive volatiles or odours that could lure pests into the storage. For those insects that are sealed in with infested grain, hermetic storage reduces the oxygen available in the interstitial atmosphere. The reduction of oxygen leads to faster control of pests infesting the grain.

The Purdue Improved Crop Storage (PICS) bags (Photo 14) that were designed to reduce grain storage losses on smallholder farms are widely used in many African countries. These PICS bags could provide a simple and low-cost method of hermetic storage to smallholder farmers in areas such as the Eastern Cape, thereby reducing postharvest losses.

The use of insecticidal aluminium phosphide tablets (Quickphos and Phostoxin) was common; however, farmers indicated that these tablets were sometimes out of stock at their local shops. Moreover, there are potential health risks for consumers and the environment due to the use of chemical pesticides during storage.

Pests and diseases
One study group was exploring using other types of grain protectants such as leaves of the Lippia javanica herb for the control of weevils. Investment in handheld moisture meters that can be used by smallholder farmers to monitor grain moisture levels at harvest and during drying and storage can also mitigate postharvest losses arising from poorly dried grain. The poorly dried grain promotes the growth of fungal pathogens resulting in mouldy grain and concomitant mycotoxin contamination.

In conclusion
The RLAT has the potential to be adapted to different production patterns and to specific value chain sections and therefore allows for a wide range of applications. It can be further applied to develop loss reduction measures and strategies for smallholder maize value chains in other provinces of South Africa and to the SADC region with an aim of reducing food losses, resulting in improved food security.

The RLAT user guide and toolbox can be accessed by clicking on the QR codes.