He is described as a strategic thinker and a staunch believer in the potential of agriculture to address several challenges in South Africa today. As the acting director-general in the Department of Agriculture, Land Reform and Rural Development (DALRRD), Mooketsa Ramasodi has the mammoth task of ensuring compliance with agricultural legislation and regulatory frameworks.

Raised in Makolokwe Village in the North West Province, as part of a family of crop and cattle farmers, Mooketsa was drawn to agriculture from a young age. He studied agronomy at the University of Pretoria, where he completed his master’s degree. He says his interest in agronomy is founded in the realisation that ‘we need to farm sustainably to feed the ever-growing national and world population’.

Stepping in as director-general
This is the second time that Mooketsa is stepping in as acting director-general and it is a responsibility that he takes very seriously. The department has just emerged as merger between the former Department of Rural Development and Land Reform and the Agriculture component of the former Department of Agriculture, Forestry and Fisheries. Mooketsa says that internally, his mission is to focus on managing the merger towards a new department that performs well.

When it comes to the agricultural sector, he believes that the immediate focus should be on ensuring that the agriculture and agro-processing master plan is concluded through sector consultations with government, business, labour and civil society. From there the focus should be on ensuring that government commitments towards land reform are accelerated.

Alleviating poverty
To Mooketsa agriculture is not only about eliminating hunger, it is also about allevia­ting poverty. ‘In South Africa, according to Stats SA (2020), 49,2% of the population over the age of 18 falls below the upper-bound pov­erty line. It is further reported by Stats SA (2019) that­ 6,9 million South Africans are suffering from hunger, while 27% of children under the age of five are stunted in their growth due to nutrition-related factors. The potential of agriculture to address these dual challenges is well captured within the National Development Plan and its implementation is an absolute necessity.’

In terms of rural development, he says: ‘There are vast tracts of arable land available in rural areas. Through sound extension and other advisory services and funding, South Africa has the potential to increase agricultural production through bringing the communal and rural fallow lands into production.’ 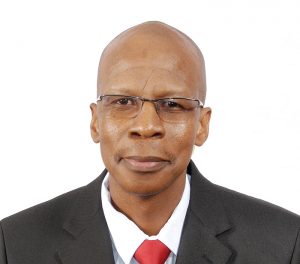 Biosecurity
Biosecurity is another high priority on his list and as part of his master’s degree, Mooketsa conducted a pest risk analysis on international flights from Cameroon, Kenya and India. The research, he says, was borne out of practical challenges that were experienced at the OR Tambo International Airport, where there was and still is a consistent threat of hand luggage becoming a pathway for the introduction of pests into South Africa. Since the study was conducted, the unit responsible for biosecurity at OR Tambo can profile flights and target resources at high-risk flights.

In terms of biosecurity and food safety, Mooketsa believes that South Africa is advancing well and has relatively good policies, legislation and regulations. ‘We also have good veterinarians, scientists and technicians in both the public and private sector. The areas that require interventions are increasing the capacity in the biosecurity and food safety space and pursuing the establishment of the Food Control Agency.’

The role of agriculture in South Africa
To see agriculture succeed, he believes that cooperation is key. ‘During COVID-19 the cooperation of the sector was instrumental towards ensuring that after an extended drought, outbreaks of diseases and pests and now COVID-19, the sector is on a growth trajectory with good signs on the agribusiness confidence levels in the sector.’

He recounts the following statistics: ‘Over the first three quarters in 2020, agriculture grew by 27,8%, 15,1% and 18,5% respectively. The growth of the sector during this period is attributable to increased production in field crops, horticultural crops and animal products. In the second quarter, where the major effect of the lockdown was felt by the economy, agriculture was the only sector to show growth in the South African economy. It has also managed to retain most of the jobs in the sector, with the current figures standing at 807 887.’

Looking towards the future, Mooketsa is convinced that transformation of the sector remains one of the critical phases that needs to be tackled. ‘The meaningful participation of black farmers and businesses right through the value chains in the sector and other related sectors is one area that requires a quantum leap.’